Apocalypse: a drastic change often brought on by some cataclysmic natural disaster.

The world of the Sentries series evolves because of an apocalypse. In this case I chose the Wyoming Super Volcano. The story of Todd and Nick Ruger begins three hundred years after its eruption changes not only the geography of North America, but the society, the people, and how they live and interact with the rest of the world.

Their world has electricity provided by solar panels, but no electronic devices. There is steam transportation, but most people use horses. From the ashes of an apocalypse rose a society different from the one before in many ways.

It’s a mix of the old and new. I try to drop in details they’d see or know about the world in the centuries before their time, just as we would today. Holdovers such as roads and books are sprinkled throughout the stories. Archeological evidence of what went before.

Together Bound is second in the Sentries series and picks up about eighteen months after the beginning of the first book, Marked Yours. In the first book they face the challenges of a new relationship, men getting to know one another and forging a life together.

While I was writing Together Bound I had definite goals in mind for the story, plot and characters. Their story is one that will, hopefully, be told over the course of six books, so lots of gradual character development and exciting situations for them to experience.

In Together Bound they face, separately and together, inner and outer forces that threaten who they are as individuals and as a couple. Todd learns about some aspects of his personality he’d rather stay buried and never see the light of day. For Nick, he’s faced—for the first time in his life—with having to function on his own and make his own choices.

This story is about change, choices and staying the same while growing. All people, all couples go through ups and downs in life, an owner and slave would be no different. I wanted to move the characters forward in their lives. They needed to face obstacles neither would expect, ones that would ensure they’d mature as individuals and a couple.

Nick’s change is particularly significant. He starts the book still on the precipice between boy and man, sheltered and protected by Todd. By the time the book ends he’s very much a man and Todd’s true partner in all aspects of their life together. He’s given the chance to make choices, ones that affect him, Todd and him as a couple, and other people.

Todd has plenty of decision making to do as well. He’s Nick’s owner, his protector, responsible for every part of Nick’s life. More than anything Todd wants a mate. He wants Nick and him to be a family. Todd needs to learn letting go is sometimes the way to hang on tight.

Just as an apocalypse sets in motion creation of the society Todd and Nick live in, one changes their lives. Each man must make decisions on his own that affect them both as a couple, creating their own personal apocalypse and changing the course of their lives forever.


Together Bound (book #2 of Sentries)
by Elizabeth Noble 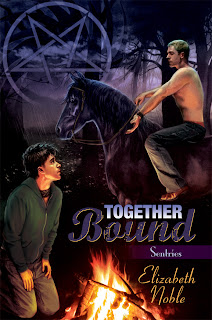 Sequel to Marked Yours

Todd and Nick Ruger have settled into their life and work, the master/slave bond in New Colorado tying them together in a sacred rite of service, protection, and—in their case—love. But out of the blue, Todd receives a letter from the vice-chancellor of New Colorado threatening their bond, demanding ownership of Nick under eminent domain.

It turns out Vice-Chancellor Clarke desperately needs the help of the sentries, especially Nick, to investigate a problem involving the Chancellor. With New Colorado on the verge of war with West Caldera, a rift in the government would be disastrous. Todd and Nick agree to help, and Nick enters the orphan slave compound while Todd joins the Estate security force.

They don’t expect the danger they discover. Now the target of an unimaginable threat, Nick and Todd will face terrors that lead to murder, imprisonment, and the threat of separation forever as the hopeless battle escalates into full-scale war.

Geoffrey Clarke wasn’t expecting his guests to particularly like him. He stood and stepped around his desk to greet them, motioning to the chairs, making a point to indicate both chairs. “Please, gentlemen, have a seat.”

When the older of the two simply stopped halfway through the room and politely informed him they were just fine where they were, Clarke knew this was going to be rougher than he’d thought. Taking the coward’s way out he retreated to the far side of his desk.

He knew the slave was young, barely more than a boy, his age being listed in the public sale records. The kid’s master was another story. It seemed there’d been two parties involved in the boy’s purchase. The fact that this man was the obvious owner and not much older than his slave confirmed Clarke’s suspicions they’d been bound as children. Ever since he’d arrived at his office earlier this morning and read the message from Todd Ruger, Clarke had been having second thoughts. Seeing the two of them now fueled his doubts.

The boy dropped to one knee behind and to the left of his master. Clarke saw how the kid curled the fingers of one hand into the hem of Ruger’s pants.

“I’m Geoffrey Clarke.” He purposely left off his title.

“I know who you are and I don’t care, you can’t do this.” Ruger’s left hand dropped onto his slave’s head. Clarke doubted the man even realized he’d done that.

“I understand this is—”

“He’s my mate.” Todd repeated the words, voice softening. “Do you have a family Mr. Clarke?”

Nodding, Clarke said, “Yes. I have a wife and two daughters.”

“How about you just hand over your wife to me for whatever I want to do with her?”

Clarke winced. The guy had a very valid point. “Look, I’m sorry, but I needed…I asked around and your name came up over and over again as the best sentry…I don’t know much about…shit.”

“So, you wanted to hire a sentry and figured the way to win me over was threaten my mate?” Ruger was spitting words at him again. The man looked positively frightening. His slave scooted farther to the right so he was more behind his master than not.

“It’s a complicated matter, I needed someone who could get the job done, but who I could trust would follow the instructions to never talk about it. Your slave is the only one I could find who had any sentry skills and he does have a special talent.” Leaning his hands on his desk he let his weight shift forward. “I guess I didn’t think this through very well. I’m sorry. I never should have sent that letter. You’re both free to leave.”

Todd’s face softened and his shoulders relaxed by a small fraction. He glanced down for a beat, his slave glancing up, their eyes locking before the slave ducked his head down again. “What do you need a sentry for?” Clarke watched a slow smile spread over the slave’s face, an expression of pride replaced what had been apprehension.

Dropping his gaze to the boy kneeling behind Todd, Clarke waved one hand up and down, “Son, stand up, get off the floor.”

The kid looked up at Todd who tilted his head and nodded. He let his hand slide from the boy’s head to rest against his hip as his slave rose and stood behind him.

“What’s your name, boy?” For the life of him he couldn’t pull the name on the kid’s records out of his head.

Clarke straightened. “Nick, I’m sorry. I had no way of knowing what sort of relationship you have with your master, I’d heard stories that sentries only took slaves to use as weapons.”

“Nick hunts, he doesn’t kill.” Todd said. Clarke couldn’t help the feeling that every sentence the man uttered was some sort of challenge. “I kill.”

Why didn’t Ruger’s last statement surprise him? “As I said, I didn’t think things through very well.”

“No, you didn’t.” Todd was snarling again, not that Clarke could blame him for being angry.

Todd crossed his arms over his chest and glared.

Shifting so he could look Nick in the eye, Clarke asked, “Is your master always like this?”

The boy, Nick, smiled. It was soft, affectionate and incredibly kind. “Only when it comes to me.”
http://www.dreamspinnerpress.com/store/index.php?cPath=55_42

Elizabeth Noble started telling stories before she actually knew how to write and her family was very happy when she learned to put words on a page. Those words turned into fan fiction that turned into a genuine love of M/M romance fiction. Being able to share her works with Dreamspinner is really a dream come true. She has a real love for all things sci-fi, futuristic, supernatural and a bit of an unnatural interest in a super-volcano in Wyoming.

Elizabeth has three grown children and is now happily owned by three mutts, a foster mutt and two cats. She lives in her native northeast Ohio. When she’s not writing she’s working as a veterinary nurse, so don’t be surprised to see her men with a pet or three. When at work she meets all sorts of interesting characters that often find their way into some story or another.
Posted by Jadette Paige at 4:00 AM

This looks great, thanks so much Jadette.

Tks,Elizabeth but the credit goes all to you! The book sounds wonderful and definitely one I'm going to add to my TB list.

I enjoyed both books, Elizabeth and can't wait for the third. thank you.