Shelter Somerset - On the Trail to Moonlight Gulch

The first word in my novel On the Trail to Moonlight Gulch is “Love.” But love is described as a powerful force, even violent. With the ability to knock one off one’s feet. Smack one in the kisser like a prize fighter. Love, like greedy bandits and loneliness, can cause unrelenting pain. Until honesty nudges aside secrets.
Moonlight Gulch seemed to write itself. I knew I wanted to write a novel set in Chicago during the Gilded Age. The Black Hills always called out my name, and I chose that as my western setting. I didn’t expect to enjoy describing Chicago in the 1880s as much as I did. I almost missed the city once I had the protagonist, Torsten, hop on a westbound train for the Dakota Territory. But when I began to describe Franklin’s homestead and the surrounding granite peaks and ponderosa, I fell in love all over again. There is something magical about the Black Hills, or Paha Sapa as the Sioux call it.

The concept of the “mail-order bride” magazine came to me when I placed myself in Torsten’s boots. If I were living in 1886, where would I find same-sex love, not fleeting sexual encounters found in cabarets? I’d turn to the same means lonely men use today—anonymous social networks. In the 21st century, we have Internet chat rooms. One hundred fifty years ago, they had Matrimonial News, a well-known matchmaker periodical that brought together forlorn frontiersmen with women around the world. We can only guess that “gay” men might have satiated their dreams through those pages, as well.

Moonlight Gulch ventures beyond same-sex loneliness in an age when it seemed impossible to find. There is another universal and ageless theme I explore. Insatiable greed. Torsten’s pen pal, Franklin, refuses to pan the gold on his homestead, but local prospectors, having long depleted most of the gold from the Hills years before, plot to take possession of Franklin’s land. It’s the age-old tale of the individual versus the ravenous mob.

I hope readers will gain from Moonlight Gulch that which I’d learned while researching and writing it. For one, we humans have changed little throughout the generations. Events and desires, like the oceans’ tides, ebb and flow. We ride them out, over and over, on a timeless journey. Only technology has really transformed through the ages. We still seek love, and use whatever means available to us to find it. I also hope readers come away from the novel questioning their own value structure. Strength in ideals comes from holding them up to the light for inspection. That is how Torsten learns the true power of love… when his long-guarded secret finally spills before Franklin’s feet, and there is no longer any room to sweep them away. 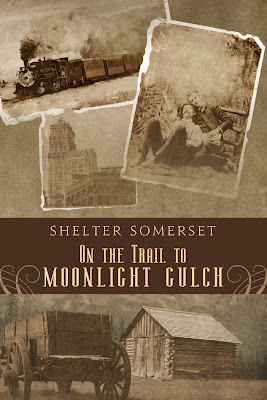 Blurb:
Nineteen-year-old Torsten Pilkvist, American-born son of Swedish immigrants, is searching for same-sex love in the hustle and bustle of 1886 Chicago. Frustrated and forlorn, Tory peruses a "mail-order bride" magazine and is captivated by an advertisement by a lonely bachelor living in the Wild West. Tory and wounded Civil War veteran Franklin Ausmus begin an innocent correspondence--or as innocent as can be, considering Tory keeps his true gender hidden. When Tory's parents discover the letters, he's forced out of his home and, with nowhere else to go, he boards the train to the Black Hills and the one place he feels he belongs--Franklin's homestead, Moonlight Gulch. Can a genuine romance develop once Franklin hires Tory as his ranch hand—all while Tory desperately tries to keep Franklin from discovering his secret?

He splashed limewater on his chest, dressed in a crisp white shirt, gray pinstripe suit, blue cravat, and felt derby, and jumped on the electric streetcar to go from State Street to the 35th Street cabaret secretly known as a watering hole for men like him. Love was not his aim—he knew that was far from his grasp at a place like the cabaret. He wanted only company, affection, the fleeting kind that might lessen his grief and loneliness, like the way some used alcohol.

The instant Tory stepped inside the cabaret, the usual stares burned holes into him. He disliked the scene, yet he knew of no other place like it in Chicago. Many of the young men, both Negroes and whites, came for “business.” They congregated at the bar and the small standing tables, some selling, others buying. The regulars recognized him as one who seldom interacted with the locals, especially those known as “renters.” A few of the renters dressed as women, which Tory found both entertaining and distasteful. The older men from out of town ogled him. They often mistook him for a renter. He avoided eye contact to communicate his disinterest.

A player piano rolled out tunes in the corner. Some of his favorites, “Oh, Dem Old Golden Slippers” and “American Patrol,” lightened his mood. The cabaret, less crowded than usual for a Monday evening, ebbed and flowed with a sluggish apathy. Since it was the day after Easter, most of the regulars who often stopped by after work for drinks had likely remained at home with their wives and children. Not many out-of-towners had scheduled trips away from their families during the holiday.

The two bouncers appeared more relaxed than usual. Tory never learned if they were like the men who patronized the cabaret. They seemed disinterested in the goings-on, their eyes always narrowed with vigilance.

A boy of about fifteen, the cabaret owners’ youngest son, served drinks behind the bar. With a thin cigar clenched between yellowing crooked teeth, he poured and poured, his face lined with labor. The slightest spill of the liquor and his father, Mr. Levitzki, the stony-faced proprietor with the cannon-like voice, who roamed the cabaret like a grizzly bear, would slap the back of his head. The father’s temper was enough for Tory to want to leave the place, but there was no establishment as safe when looking for companionship.

Tory found an empty bench against the far wall. He kept his derby on, for it gave him the extra furtiveness he liked while at the cabaret. With his hands balled in his lap, he peered around under the short brim, taking note of anyone who resembled a gentleman. Weekdays were often more rowdy than weekends. During the week, drunken construction and railroad workers would come in to make “dates” with some of the younger men. The owners tolerated the flood of teamsters until their pockets came up empty. Afterward, Mr. Levitzki would give a subtle sign—two fingers tickling under his chin—and the bouncers would dispatch to their duties and herd the rowdies like cattle and toss them out the door.

Tonight, the holiday kept most of the heavy drinkers away. Tory enjoyed the dim calmness. Disorderly crowds and obnoxious noise were not what he searched for. Light from the setting sun oozed through the stained glass above the bar. A reddish blue hue, mixed with the pipe and cigar smoke, floated around the establishment. A Negro boy in women’s clothing swaggered by him. The bustle on his skirt protruded clownishly. Not even a stage actress would paint herself with so much makeup, Tory imagined. His contemptuous smirk brought a grunt from the faux woman, and he strutted off.

Some of the patrons held hands and nuzzled while sipping their drinks. Mostly they were renters and buyers. Another couple danced cheek to cheek to the high-pitched music streaming from the player piano. Tory watched, fascinated, as a couple kissed passionately in a dark corner. Even to him, overt displays of romantic affection between men in public seemed shocking.

A man walked into the bar. From across the dimly lit cabaret, Tory saw that he held his breath when he glanced around. He appeared as out of place as Tory felt, but his Panama skimmer and bamboo walking stick gave him a debonair quality. Clearly an out-of-towner on Chicago business. Men like him filled Chicago during the week, working all day, playing all night, looking for brief companionship. Tory watched as the two renters who had been sitting at the bar, including the Negro with the caricature-like bustle, circled him. They could spot an out-of-towner with money like an alley cat sniffing out fish carcasses. The competing boys grimaced at each other, their eyebrows arched high. The white boy nudged out his shoulder, indicating he was willing to fight. The renter in women’s clothing appeared ready to counter, but then his painted face fell. Slump-shouldered, he trudged back to the bar.

As if relishing his victory, the white boy grinned and rubbed against the man, flirting like the coquettish females in burlesque shows. Curious, Tory took mental notes of the out-of-towner’s reaction to the renter. Were his initial perceptions of the dark-featured man with rounded spectacles accurate? The man’s gaze remained fixed on the dartboard along the far wall. Suddenly the man turned to the boy. His lips moved. A second later, the boy’s smile transformed into a scowl, and he stomped off to stand next to his companion by the bar. Inwardly, Tory smiled. He had been right. He was a gentleman. But a married gentleman, no doubt. And a nervous one, at that.
Posted by Jadette Paige at 2:30 AM No comments: