Josh Lanyon - All She Wrote - My Book, My Journey

Behind each book is a tale of how or why the author wrote their book. It is my great honor to introduce Josh Lanyon as my first guest blogger.  Welcome, Josh! I would love to hear the story behind All She Wrote.
~~~~~~~~~~~~~~~~~~~~~~~~~~~~~~~~~~~~~~~~
I’ve only once started writing a book with the conscious understanding that it would be the first in a series. I knew a short way into the first Adrien English novel that here was a character I was going to want to write for a long time, but I began Adrien’s journey believing he’d purchased a one way ticket.
That’s what I love about the creative process. Even when it’s structured, it’s organic and free-flowing in ways you, the creator, can’t anticipate. The effect fiction has on us all is too profound to be dismissed as anything short of magic.
All She Wrote was the first time I made the conscious decision to commit to a series before I’d written a word -- right there that’s a little frightening because there’s absolutely no way of knowing ahead of time whether readers are going to connect to a character or not. 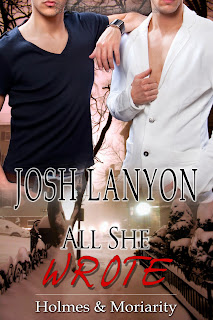 And, in fact, I stacked the odds against poor Kit Holmes by announcing I was writing a new series at the same time I was wrapping up a beloved one. Inevitably, Kit and J.X. were viewed (by some) as replacements for Adrien and Jake -- much as first born toddlers skeptically eye Mommy’s swelling belly and the monster inside.
Worse, in order to distance the second series from the first, I made it…er, funny. I don’t mean “funny” in the sense of a few amusing lines or witty dialog, I mean comical and slightly unrealistic situations. I mean a balance of slapstick, satire, and whimsy that would guarantee skimming a number of potential readers right off the top. Finding people who share your sense of humor isn’t easy. There’s nothing trickier than writing comedy. Any halfway competent writer can make readers cry. Getting them to laugh? When they’re not in the mood?
But this was the book -- the series -- I wanted to write.
I wanted to focus first and foremost on the romantic relationship and I wanted to write from the viewpoint of a character different from all the characters I’d previously written. Christopher -- Kit -- Holmes is slightly older than most of my protags. He doesn’t have the advantages of Adrien’s wealth, privilege, and beauty. He’s attractive enough but he’s turning forty and that’s a vulnerable age for a guy. He’s talented -- even gifted -- but his first successes are behind him now and he’s suffered a number of serious setbacks both professionally and personally. He’s at a point of great change -- a turning point. I think we all reach this point in our lives, the point where we’ve met a lot of those first goals -- and had to accept that some of our dreams are just not going to happen -- and we wonder what’s next? Where do we go from here? Do we stumble along following the same deep carved ruts in the road or do we take off into the woods?
Left to his own devices, Kit would stick to the safety of the road, but fate has a way of delivering what we most need in the shape of what we least want. So Kit Holmes, a mystery writer, finds himself suddenly involved in real life murders; and newly dumped and emotionally raw, he keeps crossing paths with J.X. Moriarity, a sexy, younger ex-lover who sees him with painful clarity -- and cares for him anyway.
All She Wrote is the second book in the Holmes & Moriarity series. If the series follows the traditional pattern, it won’t really break out until books 3 -5 and it will be a good five years after Somebody Killed His Editor before anyone knows if Holmes & Moriarity really has “legs,” whether it’s destined to become one of those that lives forever on a reader’s bookshelf. Meanwhile I have to suffer through reviews of first reads, book by book, in a way I didn’t with the Adrien series (which was nearly complete by the time most readers discovered it).
It’s weird because this time around readers and I are both discovering the series together, and frankly, I have to struggle not to be unduly influenced. Reader response is one of the best parts of writing, but the temptation to write to that can be almost overwhelming. Fortunately I have a very clear vision of where I’m headed and the best way to get there. I just hope readers will stay the course -- and enjoy the journey as much as I do.

A whole new journey begins with this series--I love the way you view this as a journey not only for you but the readers also. Thanks so much stopping by and sharing with all of us the path you walked to create this book.

Josh can be found hanging out at his website, www.joshlanyon.com
All She Wrote is available here.
Posted by Jadette Paige at 6:00 AM

Can't wait to read this one, Josh. I

Grumble, had trouble getting the comments to work right! It's up and working now.

Thanks Ali for stopping by!

Thanks for having me, Jadette. I'm honored to be the one to knock the cyber champagne against your prow.

Baby, you can knock anything you want against my prow...cough...or any other part of the ship. :DDD

Thanks for allowing me to host you, Josh. It's been a real pleasure.

Josh is such a pro! Just downloaded ASW - can't wait to read it.

Congrats on your blog, Jadette!

Josh, I read this over Christmas break. Wonderful. :) I love the humor, and can only imagine how difficult that must be to write. I find I don't often enjoy humorous books, but you hit the tone just right for me.

I identify strongly with Kit, enjoying his befuddled and frustrated snarkiness intensely. I've enjoyed the English series very much, but am enjoying this one even more -- just a personal thing. I do identify more with Kit's struggles than I ever did with Adrien's.

That's so nice of you, Tracy, Thanks!

Hey there! Love you too, Jase!

Aw, thanks, Ocotillo-dawn. I'll be interested to see how the series fares against the AE books once they're both completed.

I get a real kick out of writing Kit. Yet I also keenly feel JX's exasperation with him.

Josh is a master. Add that to the fact I enjoy comical adventures, and you have a reader who's buying a book today.
Thanks Jadette for convincing Josh to post on your new blog.
Congrats all around!

What a generous thing to say. Thanks, DA. Hope you enjoy the book!

>Yet I also keenly feel JX's exasperation with him.

Oh, so do I, promise. ^^ Kit wouldn't be nearly so fun if we weren't inside him, would he? :D It's hard for me to explain why I like those exasperating, imperfect characters, perhaps because I feel so exasperating myself, unable to control it sometimes, and enjoy thinking that they (we?) are lovable despite and even because of those warts.

Wow, I step away for a sec and bam the place explodes with comments! Doing happy dance over here.

It was my pleasure Ocotilla to have Josh. He's really awesome, ain't he?

People like perfect people. But I think they can love only those who are as imperfect as themselves, those who hold up the warped and chipped mirror.

A friend pushed me into reading an Adrien English book, and I just finished the first a couple of days ago. It's a wonderful story, and I can see why the series is so immensely popular. It's good to know that when I finish, you've provided a new series to captivate your readers.

Thanks for fixing the comments, Jadette! And hi, Josh!

I read the AE series one after the other while laid up with back pain. In between Vicodin-induced blackouts, I totally fell in love with both the characters and Josh's writing. (And you were the first author I ever emailed. That you emailed back had me bouncing in my chair!) Been hooked ever since and I'm really thrilled to know there's a new series building with Kit.

Big hugs, Josh! I think you've got another winning series on your hands.

It's hard for me to explain why I like those exasperating, imperfect characters, perhaps because I feel so exasperating myself, unable to control it sometimes, and enjoy thinking that they (we?) are lovable despite and even because of those warts.

And it's true that we do cut the people we love some slack -- even feel protective of their vulnerabilities and quirks.

In between wanting to strangle them.

People like perfect people. But I think they can love only those who are as imperfect as themselves, those who hold up the warped and chipped mirror.

Yeah, I think we like the idea of perfection, but we all know a - perfection is an illusion, b - it would a pain in the ass to live with.

Thank you, Cherise. I'm delighted you're enjoying the series.

And you were the first author I ever emailed. That you emailed back had me bouncing in my chair!) Been hooked ever since and I'm really thrilled to know there's a new series building with Kit.

I love to hear from readers! That was my pleasure.

Big hugs, Josh! I think you've got another winning series on your hands.

Thanks, Missy. The second book in a series is always tricky -- sophmore slump -- so it's a huge relief that you're all seem to be enjoying it.

Well that's intersting, Josh. I mean, you've been at this a while. By comparison, I'm just a babe in the woods. I love reader response, but I confess it never occurred to me it might be detrimental to take it into account when writing. But yeah, once I stop and think about it, I can see how easily things can get off track if you're not careful. Bet you didn't think you were writing an advice article, huh? lol! I appreciated this insight into your process. Thanks for sharing, and thanks, Jadette, for hosting.

Hey, Jamie! Thanks for stopping by. Really appreciate it.