Missy Welsh and KLT23 - Comment to win a copy!

Thanks for having me here today, Jadette, and hi everyone! I’ve been lurking around this blog reading all the “stories behind the stories,” so I’m particularly thrilled to now be able to offer up my own : )

My latest release is KLT23 and it’s about a Sergeant Horatio Muir and the genetically enhanced super-soldier he’s determined to save from a possibly fatal illness. How? Duh. By having sex with him, of course.

See, my goal for this little story wasn’t anything more lofty than playing with a little bit of sci-fi and offering up an homage to my man, Mr. Spock. Now Captain Kirk is all that and a double-fudge brownie, but a man who has to have sex or he’ll die?! Come here, baby, I’ll make you all better. Sergeant Muir feels the same way about the man he calls Kelty.

You could say that my writing roots began with my dad’s love of Star Trek and my mom’s love of romance novels. Green aliens and Raul? Yes please! I was 12 when I wrote my first story -- which required massive rewrites after I finally got my hands on one of those romance novels, thank you -- and I’ve been itching to get some M/M sci-fi going lately. So much so, that I’m working on a trilogy next that has all kinds of aliens falling for three astronauts who very much need their help ; )

Now, if you’d like to win a copy of KLT23 and find out whether Muir successfully saves Kelty (and how!) please leave a comment below with your filetype preference of PDF, PRC (works for Kindle), or ePUB. Thank you! 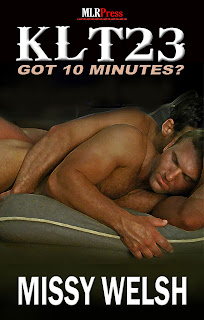 Sergeant Horatio Muir has fallen hard for the genetically-engineered super-soldier he’s been assigned to observe for the past several months. Now, when Kelty′s life hinges on the scientists who made him finding a cure for the illness slowly killing him, Muir might just be exactly what Kelty needs. Muir’s willing to sacrifice anything to save his man, including his heart, but will it be enough?
EXCERPT

I seriously loved my job, despite it consisting of me sitting like veal in a booth all day long. What I loved was the part where I got to watch the man of my dreams on that monitor and through the glass window in front of me. Every day, all day long.
Except now, I was seriously not looking forward to having to watch the man of my dreams fuck some woman even though the brass thought it would save his life.
He had been genetically engineered to be the perfect man and perfect soldier. He was their twenty-third try and the one that looked like he was going to make it. The others hadn’t made it to this stage, having never achieved consciousness after they came out of the incubators. This one, KLT23, had been exceeding expectations from the very beginning. Until he’d gotten this illness they couldn’t identify and couldn’t cure. Until Dr. Miles came up with the theory that KLT23 needed to get laid like Spock had in that Star Trek episode. Fuck or die. And in came the women.
I called him Kelty in my head, and I was growing to enjoy his method of telling these bastards he very much did not want yet another naked woman brought into his domain. This last one had walked in stark naked, gone straight for his bed, laid down and spread her damn legs. In the air! I’d held my breath in horror as he’d gone over there, but he’d grabbed her by her hair and encouraged her to get the hell out.
She’d just left, sobbing, and I watched him stalk back over to his bed and flop down. His gorgeous dick rested against his abs and he stroked it almost absently, closing his fevered blue eyes with a loud sigh. My dick grew that much harder as I watched him. He’d been walking around naked and hard as a rock for three days now. Three fucking days! And I got to watch him for every hour of my shift. It was like some kind of superhero porn channel. Except… I sighed yet again, staring and feeling that niggle of worry swim around in my gut. They said his brain wouldn’t be able to take much more of the fever. If they didn’t figure this out, he would die and it would be horrible. The most amazing man I’d ever known and I might have to sit out here and watch him die.
It wasn’t just that KLT23 was a physical embodiment of everything masculine and drool-worthy. He was smart as all hell, a really quick learner, had a huge stubborn streak, and a wiseass sense of humor that always cracked me up.
He’d picked up six languages already and got a kick out of having a Russian day or a Farsi day where he’d only speak that language regardless of how much they yelled at him to knock it off. He read the military biographies they gave him so fast that I was having trouble keeping up with reading the same books at home in my off hours. I didn’t know why I bothered since they’d never actually let me talk to him about them. Well, I guess I just wanted something to connect us more than me staring at him for eight hours a day. More than him occasionally staring back.
Like now. He watched me, sweat on his brow and cheeks pink, looking so alone. I wanted to go in there and give those amazing lips a reason to smile. He kept making me want to take care of him like I’d never wanted to with anyone else. And we’d never said a word to each other, so that was just…pathetic.
I sighed and tried to refocus on the conversation happening beside me.
“This isn’t working,” General Derringer said, rubbing the bridge of his nose under his glasses. “Why the hell isn’t this working?”
“I think I have a theory,” Miles said, and I couldn’t help leaning a little closer to hear. I loved how that little nerd’s brain worked.
“Well?” Dr. Rudolph asked impatiently, his face flushed like a wino at Christmas.
“I don’t think he likes women.”
I nearly fell off my fucking chair.
Missy

Wonderful, Missy!  Thanks for stopping by and giving us a taste of KLT23!

Posted by Jadette Paige at 5:00 AM

Thanks, SusieQ! Thanks for stopping by.

Hi SusieQ! Thanks for visiting :)

Hi Missy, lol..I like an honest author. I've read the "the only way is sex!" ploy before in m/m, but not yet wrapped up in that honesty.

And Jadette, thanks for starting this blog series, really interesting.

Glad you like it, Lil Grogan! Thanks for stopping by!

Sounds awesome. I do love good sci-fi, so is there a fight to the 'death' over the good captain? I look forward to more info on the sci-fi trilogy...astronauts, aliens, sex - who could ask for anything more?!

I like how you've taken the cliché and made it new by admitting it's a cliché. lol Thanks for sharing the fun snippet.

(Oh, is the giveaway still running? If so, I'd like PDF if my name's picked. Email's in my profile.)