Comment to Win a Copy of Back to Black by A.J. Llewellyn

Hi everyone!  Today we have a treat with AJ talking about his novel, Back to Black.  One lucky commenter will win a copy of the book. So come on out and start talking, people!  Share some love for a fantastic author and guy!

First of all I would like to thank Jadette for this opportunity. I am excited to talk about my new release, Back to Black, now available at eXtasy Books.

I was heading to Honolulu a few weeks ago for a vacation with a few close friends. I have a home there I share with my two best friends and I try to get back there as often as I can since most of my books are set there, plus, it feeds my soul.

When I arrived, the house was in bad shape and unlivable due to extensive termite damage. At this moment, it's being tented for termites, but this was how the idea for Back to Black came to me.

It was funny...before I left Los Angeles I read an article about thieves targeting homes tented for termite eradication. Not only is it cruel to the homeowners but downright dangerous. These chemicals are toxic.

As a writer, I learned from Mary Higgins Clark at a seminar she taught many years ago that a good story idea can be gained by newspaper articles and I've adopted her approach ever since.

I mulled over her checklist: who, what, where, how, when...why?

On the flight to Hawaii I had a little over five hours to think about these questions and then bingo! It all fell into place. The targeted homes in Los Angeles were in a depressed area called Inglewood.

The day we arrived in Hawaii to stay at a resort we found online I was appalled how dingy and depressing it was. It was in Makaha Beach, which itself is a lovely beach except that a half mile to the left is a two-mile stretch of beach called Tent City that is filled with hundreds of homeless people, mostly local families. The area is experiencing economic hardship...needless to say, we moved to a different hotel, but still, this experience came in very handy for my book!

As the pieces of my story puzzle started to fit, I wrote Back to Black in record time, recording my feelings about the starving dogs outside the hotel and the idea of thieves targeting poor families.

Why would they do this? You'll have to read the book to find out why!

As I began to write, the hero, homicide-robbery detective Quinn Novak and his spunky partner, Jackie Howe, came to me. Quinn is a persuasive muse who even provided me with a paranormal angle...here are the synopsis and blurb: 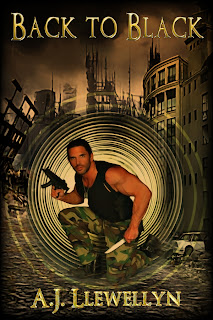 Honolulu detective Quinn Novak has to enter another realm to find scorching hot sex...but how far does he have to travel to find true love?

Quinn is working an unusual case. A string of robberies have taken place in homes tented for termites in the economically depressed town of Makaha Beach. A gang of thieves appears to be trailing pest control units, then breaking in...so Quinn is assigned watching over a particularly important dignitary's home late one night. Quinn has a problem however. He's afraid of the dark.

He's never told a soul and seems to be coping with his phobia until he spies two men breaking in and follows them in, in spite of the dangers of the pesticide - and the dark.
Once inside the house he appears to enter another realm...one filled with hot men who all want...him. Quinn has the most incredible threesome of his life, but then must leave the house. How the heck does he get back in? And can he? Now suddenly he wants to get back to black...back to the dark and the two men he left inside the house...can he ever find them again?

Hot eXcerpt:
“Somebody’s here,” the second man said. I turned and ran. I went back to the room I’d entered from and heard them close behind me. I grabbed my stun gun and turned, ready to fire, but ahead of me, oddly was an open window. How did that get here? Had I lost my sense of direction? I didn’t remember a window being here. The room went black and I thought I would choke. It was hard to breathe. I felt hands at my back, pushing me. I resisted but fell through it. When I toppled over the other side, I wasn’t in the garden of the house in Makaha Beach.

No. I was on a weird-looking street, with tall, angular buildings. Everything was steel-grey, sleek and odd looking. I felt as if I’d stepped into a nightmare world of an H.R. Giger painting. It was a freakish dreamscape and I had the strange sense of being in some kind of tunnel. Everything turned circular. My head was spinning and I fell to the ground, a stream of funny little vehicles whizzing past me.

I felt as if I were underwater, drowning. One of the little vehicles just missed running over my outstretched hand. Somebody grabbed me from behind and I felt my body lift off the ground.

“Gotcha,” a deep, male voice said as he turned me around. Before I could speak or think, his mouth clamped down over mine. There isn’t a gay man alive who doesn’t fantasize about being taken by a handsome stranger. For it to actually happen was pretty damned weird. I pulled myself away from the guy and saw the most handsome face I’d ever seen, in real life anyway. I was certain this was a beautiful mirage. I’d have to buy me some termite spray and sniff the stuff all day long if guys like this came into my mind.

He grinned at me and pulled me back toward him by the neck of my T-shirt.

He could have been a movie star or model and his electric green eyes did weird things to my hoo-hoo. This beat the creepy dreams I got when I took morphine after getting shot in the back a few years ago. Speaking of my hoo-hoo, it was having a party to which the rest of me badly wanted to be invited. The stranger’s hands were all over my crotch, one hand rubbing my bulging boner, the other trying to fumble with the button-down fly on my jeans.

Had I been inhaling too many fumes? I couldn’t tell, but I did not want to die until I saw what he had in mind.

He shocked me by getting to his knees, taking my cock out of my now-open fly, wedging it out from the top of my squashed-down boxer briefs. He kissed the head, gazed up at me and grinned, then swallowed me, his mouth a seductive O around the shaft as he moved his lips up and down, back and forth, his tongue glancing off the leaking head each time he pulled back.

This was the sweetest blow job I’d ever had in my life.

Posted by Jadette Paige at 4:00 AM

I love hearing you talk about where you get your stories AJ thank you for sharing :)

Wow doesn't cover it! That was amazing *blinking*
It's a pleasure to find good writters with good stories and definetely this is a good one.
Thank you for sharing :)

Isn't he great!? Love me some AJ!! Writing that is...Only writing. Of course, he is a great guy.

Hey Jadette.. I think it's pretty cool that you are going to be giving away a copy of A.J. Llewellyns book Back to Black. For a few reasons. One..He's Awesome and two.. It's a great way for people who haven't read him yet to get a chance to. But I don't really care about them lol ;) Now normally this is where I would beg shamelessly and give you my best pouty face but I won't do that.. Yet..But I would love to get a copy of his book so be ready for it.

(Random, but I really really love the word verification things; sometimes they are so apt. Mine right now? nummu. Yep!)

I always enjoy learning the story behind the story.
Many thanks to both of you for this interesting post.

Did I mention I beg?

Hey, if Catt's begging, can I bribe? I bake (bread, cookies & the like) for stress relief, so I have plenty of options. My current Just-Give-Me-a-Reason-to-Try recipe is rosemary biscotti. *bats eyes* & I made some really really yummy pumpkin bars over the weekend; I have lots more pumpkin in the freezer; could easily do them again...

Wow thanks for the comments everyone and for the offers of bribes. You are all making me hungry!!! Love the idea of rosemary biscotti....mmm....

I am really excited to try the rosemary biscotti, especially now that the brave brave DH has removed the wasp's nest from my little rosemary bush...and today is a bit gloomy & overcast; perfect for biscotti & hot tea & a good book.

Catt and tracykitn, too funny!

Hi ya David! Glad you stopped by hun!

Tracy..If a bribe doesn't work for them it will totally work for me. You had me at cookies. :) You got my vote!

I just wish I would of thought of that first. Normally begging really works for me. It's a gift ya know? I see I'm going to have to up my game. *winkwink*

LOL @ Catt -- I totally share with one and all. At the very least, I'm always willing to pass along recipes and/or links (some of my best come from online.)

Strippers you say? A woman after my own heart. With lots of male nakedness there is always a good time to be had!

I think you me and tracy should hang out. You get the drinks. Tracy can bring the food and I got baby oil! Twister anyone?

Hey, I'm in! Just nobody forget teh booze!

I'll bring the male strippers!! Who said we have to bend and stretch when there are plenty of hot, limber, hot, muscled young men to do it for us!!

Sit back and enjoy the view. :D

Haha, It was very cool to read about how this story came to be! I'm so looking forward to this book! Summary and excerpt are very intriguing. xD Added to wishlist! <33