Nicolai is an art restorer and he also happens to be deaf.  One of my neighbors has an adult daughter who is deaf, and one evening when I was visiting, what inspired me was the amount of our conversation Darleen was able to understand. Through a combination of reading lips and body language she was able to understand the bulk of the conversation.  The rest of our visit was signed by her mother, and we had a great time.  With Nicolai, I wanted to bring some of Darleen’s spirit, vitality, and ability to read people to the character, and I’d like to think I did.

Brian is inspired by a close friend who has been with his partner for almost twenty years, but before they met, Chuck was married and had two sons.  They are the light of both their lives, as are their grandchildren, and I wanted to bring the way Don adores his children to Brian and his daughter Zoe, who I modeled on my niece of about the same age.

I had a great deal of fun with this story because all of my characters spoke to me, even the villainous ones, and I sincerely hope they speak to you as well. 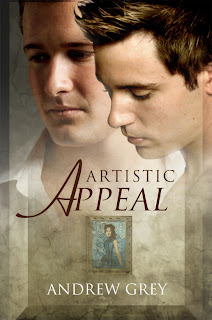 Blurb:
Brian Watson knows close friends Gerald Young and Dieter Krumpf have an ulterior motive when they invite him to their Christmas party. Brian has taken over the case to secure the return of the famous painting called The Woman in Blue to Dieter, but they don’t want Brian to be all work and no play. They intend to set him up with a friend, but he’s not who catches Brian's eye. Instead, it's Nicolai, the deaf art restorer caring for the works already returned to Dieter.
But pursuing Nicolai won't be easy. A year ago Nicolai had to fight to regain his independence after a bad break-up, and he's reluctant to give up his freedom a second time. Plus, Brian has competition in Justin, Nicolai's ex, who wants him back badly.
Nicolai's reluctance isn't the only roadblock. Brian was married to a woman for almost ten years. Now he has to confess to his mother, his ex-wife, and his young daughter that he loves a man—all while conducting a potentially groundbreaking court case and trying to convince Nicolai that love isn't about co-dependence, it's about support.

Over the past year, his main companion outside of work had been Zoe, and Brian hadn’t realized how much he missed adult company and conversation until he was deep in a conversation with Harold about his upcoming deep-sea fishing trip to Florida. God, it had been a long time since he’d simply talked to another adult.
“I’m sorry to interrupt,” Dieter said, and Brian and Harold paused their conversation. “I’m taking Zoe up to the television room so she can watch her video.”
“Thank you,” Brian said, grateful to his friend. Dieter left, and Brian and Harold continued their conversation. After a while, Harold excused himself and got up. Brian, deciding he wanted another glass of wine, walked through the house to the kitchen. The room was full of people, and Brian poured a glass of wine and was about to leave when he lightly bumped into another man. Pausing to excuse himself, Brian stopped and the tall man turned around. Bright blue eyes stared into Brian’s, and for one of the few times in his life, Brian stared open-mouthed, completely at a loss for words. This man was stunning, rather than beautiful, with piercing eyes that nearly made him flinch and deep black hair that shone in the light against his olive-toned skin. “I’m sorry,” Brian said, for bumping him, and the man smiled slightly, nodding his head before turning away.
People shifted in the kitchen as glasses were filled and new faces moved to the bar for refills. Brian made his way back into the living room and nearly bumped into Gerald, thankfully not spilling any of his wine. “Who’s the man over there with the dark hair?” Brian indicated the man he’d seen in the kitchen.
Gerald smiled at him. “That’s Nicolai Romanov. He’s an art restorer, and he’s been helping Dieter with the paintings. He’s a really sweet man,” Gerald said, lowering his voice, “and very handsome. He’s also available, or so I understand.”
“What about the man with him?” Brian asked, his eyes following Nicolai and the other man around the room. They looked rather cozy to him.
“That’s Peter, and they’re not a couple. He’s a friend and sort of acts as Nicolai’s interpreter because he’s deaf. Besides, Peter’s as straight as an arrow, and if there were a lot of women here, Nicolai wouldn’t be getting as much interpreting time. Peter’s a bit of a ladies’ man. Come on, I’ll introduce you. Nicolai reads lips, so speak clearly and look at him, and you’ll be fine.” Before Brian could stop him, Gerald was leading him into the hallway where Nicolai was looking closely at one of the paintings. Gerald lightly touched him on the shoulder and stepped back.
“Nicolai,” Gerald said once he’d turned around, “this is Brian.” He noticed that Gerald made eye contact and spoke clearly, but not loudly, to Nicolai, who held out his hand.
“Very pleased to meet you,” Nicolai said slowly, his consonants very smooth, and it took some concentration, but Brian was able to understand him. Brian shook his hand and wondered what to say. Thankfully Gerald started things off.
“I work with Brian. He and I try to get art works returned to its proper owners. Brian is handling The Woman in Blue case for Dieter and me,” Gerald explained, and Brian saw Nicolai’s eyes light up.
“That must be exciting,” Nicolai said. “Dieter has told me about his great-grandmother. It is a very exciting story.” Brian saw Nicolai’s fingers and hands moving, presumably out of habit.
“Daddy.” Zoe barreled into him laughing before turning to her Uncle Dieter. “I turned off the player.”
“Zoe,” Brian said, still looking at Nicolai, “this is Mr. Romanov.”
“Hello.” She suddenly seemed shy, and Brian hugged her to his side.
“Nicolai, this is my daughter Zoe.” Brian made sure to face Nicolai so he could read his lips.
“Hello, Zoe,” Nicolai said as he signed, and Brian heard Zoe inhale in surprise as she watched Nicolai’s hands. “Zoe,” Nicolai said rather clearly as he slowly signed her name. Zoe brought up her hands and began to move them, mimicking the movements. Nicolai gently corrected her fingers, and soon Zoe could sign her name. “Nic,” Nicolai said and then performed the signs for his name. Brian found himself watching every movement of Nic’s graceful hands, trying to make the signs himself along with his daughter.
“Like this,” Nicolai told him, and Brian nearly jumped when the handsome man touched his fingers, lightly caressing his skin as he coached him through the signs. Brian repeated the movements for the three letters, and Nicolai smiled his encouragement. Brian wanted to ask Nicolai to teach him more signs, if only to get the other man to touch his hands again.

Bio:
Andrew grew up in western Michigan with a father who loved to tell stories and a mother who loved to read them. Since then he has lived throughout the country and traveled throughout the world. He has a master’s degree from the University of Wisconsin-Milwaukee and works in information systems for a large corporation. Andrew's hobbies include collecting antiques, gardening, and leaving his dirty dishes anywhere but in the sink (particularly when writing) He considers himself blessed with an accepting family, fantastic friends, and the world’s most supportive and loving partner. Andrew currently lives in beautiful, historic Carlisle, Pennsylvania.
Links:
web site:  www.andrewgreybooks.com
email:  andrewgrey@comcast.net
Purchase Link:  http://www.dreamspinnerpress.com/store/product_info.php?products_id=2581
Posted by Jadette Paige at 4:00 AM