Tia Fielding and By Any Other Name

When I was sixteen, our local, tiny writers’ ”club” had this end of the summer event. There were a couple of less known writers there for workshops, and I was the only member under 30 to attend.  The local paper ran an article about the event, and of course I was the curiosity who got interviewed right after the organizers. My mom still has the clipping somewhere. Me, looking awfully uncomfortable and young, trying to look good for the camera.

The gist of my little interview was “I want to write a novel one day. Just to get one published is my ultimate dream.” and now, about fifteen years later, I’ve finally done it.

By Any Other Name came to be in a way that surprised me. I had this vague idea, but from the beginning I decided that I wouldn’t just write it. No, I’d plan it carefully (totally unlike me by the way, I never plan a thing, instead I just do…) and use November to write it, because some writer friends were doing National Novel Writing Month and well, I’d wanted to attend it for a couple of years.

I ended up making notes and whining and making more notes for better part of three months before November finally came. By the time I was able to start writing, the story poured out of me, and I had 50 thousand words to win in NaNoWriMo in 14 days.

Later on, during the editing process, I added plenty to it, but that was after my publisher asked me if I wanted it to be a novel, because as it was, Dreamspinner Press’ novels are over 60k words long. I jumped to it, and finally, a little more than nine months later my baby, By Any Other Name, was born.

My original idea was to write the sequel to BAON this year during NaNoWriMo, but I’m going to write something else instead. There is a sequel in my head though, I just need to fish it out, eventually.

BAON is basically a story about love, friendship and the healing process. I didn’t want it to be too heavy or concentrate on the abuse Skye suffers. There needed to be hope, and I wanted to show a person who is almost healed, who just needs the final nudge. That was where Thom and Dru came in. 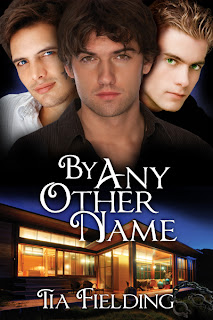 I wanted to write a ménage, because I enjoy reading them myself, but I didn’t want there to be instant solutions or instant sex. Those I had read enough in my foray into finding good M/M/M-fiction. I hope By Any Other Name delivers a good story, likeable characters who seem real, who are confused and insecure at times. As humans, we all go through insecurity, even when it comes to the person we just know is the one for us, if we’ve been lucky enough to find them.

Maybe the message of BAON should be that love doesn’t heal you, but it does give a bloody good nudge to the right direction?

Dru and Thom have been together for three years, and despite Thom’s occasional bouts of insecurity and Dru’s fear of rejection, their relationship is rock solid. Then Dru’s long-lost friend, Skye, suddenly reappears, shocking them both. Skye suffered years of inconceivable abuse before escaping it, and while he’s back on track, he has nowhere else to go as he begins to rebuild his life.

Dru, Thom, and Skye each want to belong somewhere, to belong with someone—or someones—with no fear of being hurt, set aside, or left behind. It’s a challenge with daunting odds, especially for Skye, who’s never loved before. He’s determined not to come between his two friends who so clearly belong together, and it will be up to Dru and Thom to conquer their fears and convince Skye to stay.

Funny thing, how life turned out. He had never really thought about the whole cycle of things, but it was there. He had left Rowan Falls and Dru, and now he was going back to some fifty miles from Rowan Falls and to Dru. He hadn’t been sure about going back at all. Hell, who knew what Dru would think about him and how he had just vanished? Maybe he had been torn and hated Skye for leaving like that? Maybe he had felt betrayed?

The train of thought led Skye to berate himself; who knew if Dru even cared after the initial disappointment?
Or maybe he had been happy to get rid of the poor kid who always hung around him? Why would he do this, except out of charity? He wouldn’t, not when he had a new life and all. Skye had gone online too, to do some research of his own on Doctor Al’s computer. Dru had a business that seemed to be doing well, or so

Al had said after gathering information online. He also had a boyfriend. Or a partner—that was probably the right word for what that Thomas person was. Not only would Skye be living with Dru but with this Thomas, whom he had never met. The thought made his heart skip a beat and his breath catch in his throat.

“Skye, you ready?” one of the nurses, Tim, asked from the doorway of Skye’s room.

“Yeah, I am,” Skye said, clearing his throat as he glanced around and grabbed his duffle bag from the bed.

“They want you in the cafeteria.” Tim grinned, and Skye rolled his eyes. Whenever someone was released from Haven because they were doing well and going home or wherever, there was a little party. The other nutjobs would say nice things about the one leaving, and there would be cake. No balloons, though, not after Mr. Skittles had gone nuts and run into a wall the year before, when Melinda was released. Damn, that man was crazy—and apparently had a fear of balloons. Reminded him of clowns. Coulrophobia was something not to laugh at. Even the thought of that made Skye snort.

When Tim looked at him inquisitively, he mouthed “clowns” and made the nurse chuckle too. They had had this conversation before. It wasn’t clowns or balloons Skye was afraid of. His fears had to do with darkness, basements, small spaces, being confined, and anything overly religious in the Christian way. It made him want to puke, run, and faint in no particular order.

Tia Fielding lives in a peaceful little town in a small country in northern Europe. She loves nature, her horses, cats, and even the yappy little thing that occasionally gets called a dog. Tia learned to read before she went to school at the age six and began writing as soon as she figured she had stories to tell around the mature age of seven. Stories about horses, adventures, and ghosts might have turned into hot GLBTQ-romance, but she still has a wicked imagination and, hopefully, more stories to tell.