Thank you, Jadette, for having me. I’m happy to be here today, especially since it’s the official release day for the book I’m going to talk about, Snakeskin Boots. That’s my long-talked about, finally published wereboa story.

I fully expect a number of comments asking, to varying degrees, “Wereboa? WTF?” After all, most shapeshifter stories are about mammals. Wolves and big cats form the vast majority, with a few others sprinkled around. Reptiles? Birds? Arachnids? Not so much.

Just where do wereboas come from? I was inspired while browsing the NSFW Photos section of the M/M Romance group at Goodreads. Yep, a dirty picture led me to writing a story of a wereboa constrictor. Well, the picture led me to the smart-ass thought that you would need to be able to unhinge your jaw for certain sex acts with the (most likely photoshopped) man in question. From there, it was a simple leap to a wereboa constrictor. I wondered why no one really writes weresnakes, or lizards, or most other animals. Why not? Just what would a weresnake be like?

It turns out he’d be snarky, self-depreciating, and a bit fed up with all the wolf worship going around. After all, no one wants to cuddle with something cold and scaly when you can snuggle up to something warm and furry. Everybody loves the wolves. Jeff turns out to be no exception, despite how hard he fought the attraction.

What’s next? I’ll be at GayRomLit in New Orleans next week, and I’ll have trading cards, and some other treats with Brad and Jeff, to hand out. I have a holiday story celebrating No Pants Day set to come out next year–on No Pants Day. It’s the first Friday in May, which falls on Star Wars Day next year, so mark your calendars and find your Darth Vader underoos. May the 4th be with you.

And Jeff has friends. They all want me to tell their stories too. Aaron, the spider monkey is almost done. After that, I’ll answer the question “why did the werechicken cross the road?” and there’s a cat in the library stacks lining up to take over my brain for a while. A whole were menagerie is waiting, including a lemming, a scorpion, and even a liger named Napoleon prowling about.

I guess it does sound kind of silly when you say it that way. 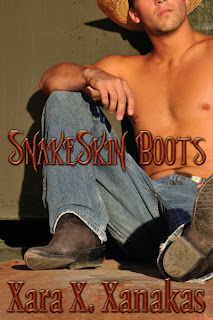 Jeff Cordata has always known wolves can be dangerous. Not that his luck with snakes has been any better. It's not easy being a wereboa constrictor in a world that worships werewolves.

When the customer he's been watching for months turns out to be an interested wolf, his first instinct is to flee, but his attraction to Brad Cannidy is undeniable despite the strained relations between their families. Then Jeff’s anaconda ex-boyfriend re-enters his life as a pair of snakeskin boots, the hunt begins for the murderer who is turning weres into accessories, and Jeff will have to decide if a boa and a wolf can really mate for life.

I’m starting to get a migraine from rolling my eyes so much. Maybe I should work on that. I know she’s just yanking my chain. She’s tired of the hype too.

“Or Jacob? Werewolves are so sexy!”

Really? Think so? Know any? ’Cause all the ones I know are assholes. Everybody wants the werewolf. “Ooh, they’re so protective and nurturing.” No—that’s called “possessive” and “controlling.” They’re jealous and territorial, and they think they’re the gods’ gift to shifters. They look down their snouts at the rest of us. Granted, I may be a bit bitter, but the wolves just make me want to shed a skin. No one ever says, “Wereboas are so sexy.” I’m not even poisonous, but they’d still rather cuddle with a wolf, with his big eyes and teeth.

“Come on, Jeff. You’re gay. You should love this.”

I stare at her. Did she really just say that? “Kim, do you have any idea how heteroist that sounds?”

“No, you didn’t think at all. That’s the problem.”

At least she has the good sense to blush and look apologetic. She’s usually not like that. And I’m not just making excuses for her. Really. I know she’s just kidding around—she thinks she’s funny.

“I know you didn’t, but the next guy might not. Try to curb that, will you?”

“Yeah, I know. My mouth has a mind of its own sometimes. I’m going to do returns. Besides, eggplant’s here.” She starts off, giving me a wink and sly grin.

I watch her walk off with a stack of books. Out of the corner of my eye, I see him again. He’s facing the cookbooks, but his eyes are cut toward me. It looks like his eyebrows are knit together, like he’s confused.

How could she think I didn’t notice him? I’m tall—six-two—but he’s even taller. He’s got to be six-six at least. And he’s everything I’m not. Wavy, black hair, pale-blue eyes, built like a brick wall. I bet he’s got muscles in places I don’t even have places. Dark hair peeks out of the V-neck of his tight, lightweight, navy-blue sweater. Not in a ’70s swinger way, though. On him, it looks rugged and masculine. And, damn. There’s the eggplant he’s got to be smuggling in those jeans. I would love to coil around that.

Guys like that never go for guys like me. Hell, they hardly ever go for guys to begin with, let alone tall, rail-thin, monochromatic freaks like me. I’m copper. Head to toe. Straight, copper hair, copper skin, copper eyes that sit a little too far apart from my flat, copper nose. I look very much like the boa I become when I shift.

I’m sure he’s heard our conversation. He was smirking earlier. I can sense the warmth of his body from here. Yes, it’s a snake thing. I can tell when someone’s hot; they’re just never hot for me.

I watch him as he selects one of the Bobby Flay cookbooks to look at. Hey, if he’s into redheads, maybe I do stand a chance. A customer rips me from my musing.

“Excuse me. Can you tell me where Twilight is?”

Fucking really? You just passed a life-size cutout of Edward brooding and Bella sulking, to ask me where Twilight is?

“Just behind you, to the right,” I reply through my pasted-on smile.

Eggplant laughs out loud at that one.

“Well, he’s certainly a fan favorite.” Some days I really hate working in a bookstore, especially the customer-service counter.

She makes her way back to the huge display she passed to get to me, and eggplant saunters up to my counter. Guess with that basket, he doesn’t really have a choice. It’s like adding a rudder to guide a kayak. And now I’m staring at it. And now he’s noticed me staring at it. Crap.

“Not a vampire fan, I take it?” he comments, those damn powder-blue eyes sparkling. Fucking sparkling. Can you believe that?

“So you’re just not into Edward? How about Team Jacob?” Does he look hopeful at that?

“No, I’m an adult, thank you.” That earns me a look that goes straight to my dick.

“Yes. Yes, you are,” he says in a rumble from deep in his chest. Being a snake, I can feel the vibrations through the air, but I would love to feel that directly through my skin. Preferably through my back, with him pressed up against me. Naked. My cock throbs at that thought.

“Is there something I can do for you?” I ask, my voice a little lower than usual. Yeah, I know. It’s cheesy, but the view is damn nice, and I’m inclined to throw a little innuendo out. He’ll either play, or not.

“So, Jeff.” His eyes linger on the nametag pinned to my chest. “I was going to go get some coffee.”

“The coffee counter is upstairs, in the front-left corner of the store.”

“I know where it is. I’m in here a lot.” Don’t I know it? Last week, he was here in an exquisitely tailored suit, looking like a politician. I was restocking the shelves, and he seemed very interested in the Ramona and Beezus books near where I was. The Thursday before that, he looked like a lumberjack. The time I was in computer books, he seemed interested in learning a new language. Oh, yeah. I’ve noticed he’s in here a lot.

“I was planning on having company,” he says.

Wow. Right between the eyes with that one.

“Well, I’ll make sure your date knows where to find you when she arrives.” Smooth, huh. Almost sounds helpful.

He chuckles. “My date wouldn’t be a woman.”

“Well, if anyone asks, I’ll make sure they know where to find you, Mister—?”

“Cannidy. Brad Cannidy. When do you take your break, Jeff?”

“Don’t worry, Mr. Cannidy. I’ll make sure Kim knows you’re expecting someone when she covers for me.”

He chuckles. “No, Jeff. You misunderstood. I want to know when you go on break, so I know when I can expect you to join me.”

In high school, Xara X. Xanakas shunned typing class assignments in favor of writing cliffhangers that would drive her friends nuts. She's been toying with writing ever since. More than twenty years later, she has finally found her inspiration. A wide cast of characters, including a menagerie of shapeshifters, keeps pressuring her to write their stories, telling her about themselves at some of the most inopportune times.

Her fine arts degree has been absolutely no help in the IT job she uses to pay the bills. She lives in Texas with her biggest fan and two cats.

Posted by Jadette Paige at 4:00 AM

Thanks so much Xara for guesting over here. I absolutely love your cover.