Chris Quinton - Game On Game Over

Because I'm a cynical bitch, I wanted to write a story with a Real Cat in it, and a Real Child. So the Game Over part was born. I can't say too much more or it'll give away too much of the plot *g*.

Then a while ago a friend suggested I should change the names of my two heroes and submit it to my publisher. Which seemed like a good idea at the time. Of course, it's never that simple. Fanfiction is often written in a kind of shorthand. The readers know the characters, their backgrounds, what drives/haunts/motivates them without having it spelled out for them. They know what they look like, their lovers and their friends. The writer doesn't have to the usual character-construction groundwork - if the TV show/film/book has done its job properly, it's already been done.

I needed a setting, and I needed a plot with jeopardy [love that word!] and a place where my two guys could have their first meeting. One of my great loves is archaeology, and I thought an archaeological dig would make an interesting set. The jeopardy could come from where the dig was - the current unpleasantness in Afghanistan affects the countries around it, so I decided on Tajikistan. That gave me the chance to use the famous Silk Roads, so I invented the ruined caravanserai near the border. The dig itself would be a good cover for an MI6 agent, allowing him to contact and meet with the local tribal elders to negotiate their cooperation with the West.

The Silk Roads have fascinated historians and journalists for years, and road trips with photos and purple prose make great coffee table books. So a photographer trailing along with a journalist ends up at the dig, photographer meets undercover MI6 agent, and - bingo. I have my two heroes set up.

But the course of true love/lust does not run smooth, and I can't say more without blowing the plot. 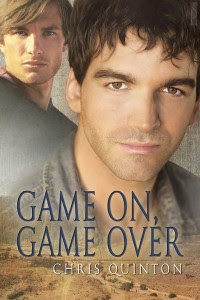 John Jones, aka Aidan Whittaker, a negotiator with MI6, is currently on assignment in Tajikistan, close to the Afghanistan border. Overtly on a University-run archaeological site, he's covertly brokering a deal with local tribal leaders. His undercover mission is complicated by the arrival of a couple of Americans; journalist Brent Babcock and his photographer Scott Landon. The two men are there to document the ancient Silk Road, but when Babcock gets wind of a hot news story, he starts asking awkward questions.

Scott Landon is a different kind of trouble for John. Fourteen years John's junior, gay and single-minded, he wants into John's bed. Not being prepared to jeopardize his operation, John rejects him, despite being drawn to the younger man. But then events around them spiral out of control.

Doctor Jones led him away from the site, up the dusty track to the apology of a road, then stopped and turned to gesture back down to the site. And started talking.

This was literally the overview. Scott expected minimal information, a sketchy description of the site and its history. Instead he received a full-blown lecture on medieval trade routes, politics, sponsors, and banking that left him in something of an information-overloaded daze. John Jones obviously intended to bore the bejesus out of him, but he failed. The man possessed a natural talent with words and his love of his subjects came through in every phrase. A lot of the historical minutiae sailed over Scott's head, but the deep, expressive voice held him spellbound, and enough facts lodged in his overheated brain to let him ask some reasonably intelligent questions. At the same time, he was framing shots in his head, noting the way the caravanserai fit into the landscape, how the westering sun and the lengthening shadows painted the ruined walls and the irregular checkerboard of trenches, how the colorful tent village on its plateau looked almost medieval in its own right. But one more question burned on his tongue.

"I don't get it," Scott blurted. "I mean, I know why Brent's doing the Silk Roads. We've spent the last couple of months traveling some of the shittiest roads I've seen, staying in places I wouldn't stable a goat, and eating crappy food. At the end of it he'll have a book guaranteed to hit the best sellers' list and make him a load of cash. I went to Peru with Felipe Hermanes—he's a journalist and into conservation—because he wanted to explore and record what he could of the rainforest before the loggers obliterated it, and use his book to raise enough awareness so there'd be more of an effort to stop the destruction of the rainforest. So, okay, I understand the difference between commercialism and protecting the planet. But you, these kids, you're out here in a strange land, living in tents with basic amenities, no real freedom to come and go, watched over every now and then by the army. Just to dig holes in the ground. Why? What's the point of it?"

"Why?" John rounded on him ferociously, taking Scott's breath away. "Do you think we live in a vacuum? That present and future are the be-all and end-all of two-dimensional lives? The point is, Mr Landon, you, me, those postgraduates, the lecturers, the cooks and drivers, are linked to the past as surely as we are to the present. We are no different to the people who traveled the Roads and stayed in the caravanserai. We are no different from the Roman soldier on Hadrian's Wall who wrote home to his mother asking her to send him more socks. And yes, before you ask, he's genuine. Every minute fragment of the past found in excavations enriches the present. Every translation of newly discovered writing expands our knowledge and strengthens the links to our past. Human nature has changed very little in the millennia we've walked upright, and we're faced with the same choices today as our ancestors were. The only differences now are our enhanced abilities to create and destroy."

The words seemed to sear themselves into his brain and take root. Scott gazed at John, mouth parted, eyes wide, completely ensnared by the man's passion and not a little turned on by it. "Wow," he breathed. John's color rose and he turned away, his mouth in a thin, uncompromising line. "You give one hell of a speech." The archaeologist didn't answer, just strode on down the track, leaving Scott to trot after him.

"Can I see some of the finds?" he asked as they returned to the excavations, more interested in prolonging the time he spent with the man than a desire to see the excavated stuff.

"I suppose so," John agreed reluctantly, and detoured to the building.

Chris started creating stories not long after she mastered joined-up writing, somewhat to the bemusement of her parents and her English teachers. But she received plenty of encouragement. Her dad gave her an already old Everest typewriter when she was ten, and it was probably the best gift she'd ever received – until the inventions of the computer and the worldwide web.

Chris's reading and writing interests range from historical, mystery, and paranormal, to science-fiction and fantasy, writing mostly in the male/male genre. She also writes male/female novels in the name of Chris Power. She refuses to be pigeon-holed and intends to uphold the long and honourable tradition of the Eccentric Brit to the best of her ability. In her spare time [hah!] she embroiders, quilts and knits. Over the years she has been a stable lad [briefly] in a local racing stable and stud, a part-time and unpaid amateur archaeologist, a civilian clerk at her local police station and a 15th century re-enactor.

She lives in a small and ancient city in the south-west of the United Kingdom, sharing her usually chaotic home with an extended family, two large dogs and sundry goldfish.

Chris is on FaceBook here  - Manifold Press is here
Silver Publishing is here - GLBT Bookshelf Wiki is here
Posted by Jadette Paige at 5:00 AM