Thank you so much Jadette for letting me come play in the inspirational sandbox!

I wrote Hot Head on a dare from a dear friend who I was helping with structure questions on her own novel. I’ve been writing for 20 years in film and theatre, but fiction has never been my favorite form; she told me if I didn’t write an M/M I was “a lazy idiot.” I laughed and agreed, but then I needed an idea. I didn’t want to write something porn-y, which is the criticism often leveled at male writers in the genre. I wanted angst, and heightened, compressed emotion. And then I remembered an intense confession I’d heard…

See…starting in the late 90s, my best galpal in the whole universe went through this compulsive, sex-n-drama addiction in which she became obsessed with and only dated a string of gorgeous, tormented firefighters. For seven years or so, she found hysteria very romantic and for that stretch of time she only had eyes for unfaithful troublemakers with eight-packs and cocks like waste baskets. Most of these relationships lasted under a year, operatic tragicomedies with dildos and screaming. Most ended with three a.m. arguments in which she hurled crockery and birthday-gifts out the window at the “cheating lying asshole” she’d just dumped while he begged for forgiveness with crocodile tears in the street below her window. Lots of agita, lots of broken promises, incendiary sex, but (safe to say) completely unhealthy.

For those seven years, I logged untold hours on porches and barstools listening to crazy heroics, sleazy anecdotes, and odd confessions because these hot mooks wanted to impress my friend with how hip and “cool” they were with her gay best friend. They all loved telling stories, and they had stories that defied belief. The FDNY is insane and its members take pride in that. Full stop.

One night in about 2002, she and I were writing in a house upstate. She was editing a novel, I had to finish a screenplay because a play of mine had won an award and sold to film folk. We go away every summer  for intense marathon writing, and on the weekends our men would visit.

While I did the dishes they had loud, hilarious sex upstairs. My friend fell asleep after, and then G clumped downstairs in a pair of sweats because he hadn’t eaten. He fixed a plate and I poured us a couple whiskeys and we went out to the porch so he could smoke. Now, this guy was a career fireman: 30ish, Irish mutt, probably wore a size 52 suit, hands like roast beefs, big open face and doe-eyes on top of this wall of muscle. I remember we were telling gross dating stories, NC-17 stuff about sex we’d had and things that freaked us out. He mentioned to me that I didn’t “seem all that homo” and joked about his “crappy” gaydar but made sure I knew he had no problem with folks doing their thing. He mentions a meathead couple at his gym who gave him pointers and a no-bullshit female podiatrist who he likes; he’s pretty sure all of the above are “homos” but he thinks they’re “so cool.”

At this point I felt tired and thought it high time G go upstairs for hokey-pokey round two, so we could all get some sleep. Before I could say my goodnight, this sweet mook kind of thumped me on the back; his face got serious and he didn’t say anything… but I could tell he wanted to.

Very quietly, looking at the dark yard, he confessed that he had once loved a man. “Like that,” he said, a guy as straight as he was. I had NO idea what to say but I nodded in support of the idea. (HOT! Was the thought I had actually.) G explained that the man was his best friend and fellow fireman, a legendary golden-boy around the FDNY… a courageous nutjob working at the worst houses, so gorgeous he was date bait for the other crew members, and a habitual cheater who got away with everything because the world loved him.

Both of them were “totally straight,” G said. Hell, they’d tagteamed “broads” together, puked on each other, bailed each other out of jail after bar fights… but at a certain point G had realized that he loved-loved his friend. Affection had grown into attraction, but he never confessed his feelings. Speaking would have jeopardized the friendship, the FDNY, their families, their lives.

And then his best friend was killed at the World Trade Center on September 11, 2001.

They had both worked the scene but only G made it out alive. He had been outside when the first tower went. He had no idea what had happened to his buddy, couldn’t find him in the chaos, didn’t even know how to try because they hadn’t spoken in over a month. Command had been wiped out in the collapse and thousands were lost while the world burned down around them.

That day, without ever knowing the truth, his best friend simply vanished into thin air.

Even now, retelling this, I can see the stricken look on his big baby face … the pain and grief and anger and regret churning inside of him while he sat smoking a cigarette with a shaking hand on a porch at night. I will never forget his stare, creased with a terrible, patient longing he’d carry until he died himself.

I knew. It was so clear to me that he wished he had died on 9/11. That’s what he was saying, what he confessed to me. He vibrated with the desire dig and dig and dig until he’d dug his rut into a grave. I don’t know how else to explain it. At that moment, I knew he was pretending to be alive and taking stupid risks on purpose, I knew how he would die, and (maybe) only I knew why.

In a way, he buried his secret in me. I think G needed so badly to confess the truth to someone sympathetic it had just slipped out. The thing is, he couldn’t tell anyone his secret except some gay writer he barely knew, because his life had no room for that unspoken love, or those unlikely lovers. No one could ever know. When he and my friend did split up she admitted that she felt like she’d using him like a big dildo, a hung fireman with sad eyes and a dead heart, and that they’d openly joked about when she’d get tired of him being a visitor in his own life.

So when my friend dared me and I needed a germ of an idea for an M/M that could support the angst, sexiness, and drama I crave in my books, G’s face on the porch came to me like a handsome ghost. I wished more than anything that I could answer a question he’d never asked and wanted to give a happy ending to two men who could never have found it outside the pages of a romance. 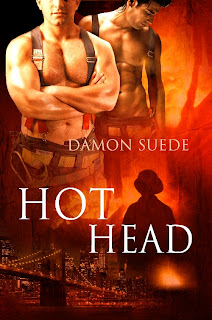 So Hot Head grew out of that night I sat listening on the porch with no way to help a man who’d been punished for loving… if I succeeded at all, it’s because of the pain and truth he shared. Writing the book was a chance to rewrite their lives the way they might have been, unspoken love given time to grow and the happily ever after those men deserved.

Damon Suede grew up out-n-proud deep in the anus of right-wing America, and escaped as soon as it was legal. Though new to M/M, Damon has been writing for print, stage, and screen for two decades. He’s won some awards, but counts his blessings more often: his amazing friends, his demented family, his beautiful husband, his loyal fans, and his silly, stern, seductive Muse who keeps whispering in his ear, year after year. You can get in touch with him at:

It was a really good book, Damon :)

Hi Thorny! Thanks for stopping by.

AND thank you, Damon, for guesting on my blog! Hugs, baby.

Wow what a story. My heart goes out to G. You really have me interested innthis book now thanks.

I read Hot Head about a month ago and loved it. Damon is also a pretty awesome guy. Totally cool you got him to visit your blog