I had a few half-written novels tucked inside my desk drawer when one night the idea for my Amish Series struck me. I literally jumped out of bed and began writing a synopsis. Sixteen pages evolved into more than two-hundred, and six months later I had my first completed manuscript, Between Two Worlds. The sequel, Between Two Promises, followed five months later.

I cannot explain what compelled me to finish the Amish Series while I had four unfinished novels still begging for my attention. I suppose I felt a deeper connection with the characters in my Amish Series. I have always been fascinated with the subsistent lifestyle of the Amish and how, in most cases, they eschew government aid. They are virtually a stateless people.

For several years I had been searching for books about the subject of the Amish and homosexuality. Other than the typical banal nonsense, I found nothing. That’s when I decided if I want to read something about homosexuality inside the Amish community I’d have to write the book myself. 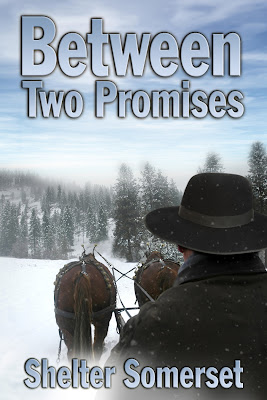 Between Two Promises continues with the story of Aiden and Daniel, two lovers lost between two worlds. Neither belong anywhere. Aiden is agnostic and gay, yet fails to follow the typical gay tenets. He feels a stronger bridge with the Amish community than with his progressive Chicago neighborhood. Daniel, Amish and gay, similarly struggles with his identity inside his austere community. I draw a parallel between the Amish and the gay communities. While they may seem as opposite as two cultures can be, both have their own strict set of “ordnungs” one must obey to fit in. I enjoyed exploring the theme of “man versus society.” Post-modern society has, in many ways, gobbled up the individual. I struggled alongside my characters to find a place where they can be individuals while fighting off the thorns of conformity.

Blurb:
Daniel Schrock and Aiden Cermak have forged a life in the rural Montana foothills, but a shadow still lingers, made stronger when a letter arrives from Daniel's brother Mark inviting him to his Christmas wedding. Daniel fears returning home might force what he wants to avoid: telling his family about Aiden and facing the dreaded Amish shunning.
Despite the uncertainties, Daniel and Aiden head to Illinois, where frustration will not only endanger Daniel's relationship with his family and the church community, but his bond with his boyfriend, who leaves Daniel with a choice: him or the Amish. Before Daniel can stop Aiden, he's gone... and threats from the past resurface, crystallizing Daniel's fears about a murderer still at large.
As he desperately searches for Aiden and the identity of the suspected killer, Daniel will have to decide if love is important enough to risk losing everything he knows. Will Daniel choose to keep his commitment to the Amish church or will he stand by the promise he made to Aiden that first night they made love?

Shelter Somerset enjoys writing about the lives of people who live off the land, whether they be the Amish, nineteenth-century pioneers, or modern-day idealists seeking to live apart from the crowd. Shelter’s fascination with the rustic, aesthetic lifestyle began as a child with family camping trips into the Blue Ridge Mountains. When not back home in Illinois writing, Shelter continues to explore America’s expansive backcountry and rural communities. Shelter’s philosophy is best summed up by the actor John Wayne: "Courage is being scared to death but saddling up anyway."