Thanks for joining me on the Incursion virtual book tour! Feeling lucky? I’m giving away three prizes to commenters on any of the blog tour stops. Comment on this post (feel free to ask questions!) and you might win! The first winner will receive a $25 Amazon gift certificate and a swag bag with assorted magnets, wrist-bands and other goodies. Two more lucky winners will receive swag bags as well. I ship internationally and will draw the winners from all commenters after the tour is over. Deadline for entry is 7/15/12. Please include your email address in your comment so that I can contact you.  Enjoy!
How I came to write Incursion

Ideas are like free radicals – they ping around and you’re never quite sure what they’ll get up to. Unlike free radicals, they usually are not bad for your health (unless too much caffeine and too little sleep count).

Anyway. “Incursion” came from several sources. One was a reader’s request to write a book with a disabled character. I mulled the idea for a while, then handed the concept to my Muse, and Kyle was what he came up with. Another source was actually visual. Reese Dante did my cover for my fantasy novel “Scorpion”, which is about a brotherhood of mercenaries in a medieval fantasy world, and apart from the cover that eventually became the official cover for Scorpion, she sent me a piece of concept art that was a greyish, scruffed and metal-looking background with a black scorpion stencilled onto it.

I loved the look and feel of that, but it was a lot more science-fiction than fantasy. Regardless, though, it pinged an idea in my head that was “oh wow, I could write Scorpions in Space!” Hence “Incursion” features  another mercenary band, and I’ve named their ship Scorpion as a kind of in-joke for myself.

The last major input was a discussion we’ve had a few months ago in the m/m genre – a big blogger who styles herself as a supporter of the gay community defined “gay men” as only men who are born with a penis – thus excluding transmen and other variations. Almost needless to say, this was extremely upsetting to trans writers and transreaders and supporters. Somebody went out there and defined what it means to be a man, and it was just about a “penis attached from birth”.

Personally, dealing with these questions was a battle, and I’m grateful that the matter was brought up. It not only made me stronger while I went back to the drawing board and pondered these issues, it made me more thoughtful and then, having conquered my own issues, I could walk away without hatred or bitterness. Shapeshifters cannot be defined, and, quite frankly, those categories are alien to me, and some people simply can’t (or refuse to) see the full picture.

All of this went into “Incursion”. When I encounter an issue that touches me so deeply, I very often work it out on the page. Of course not to preachy or convert. At the end of the day, “Incursion” is a space opera, it’s a love story, it’s even a little spooky, and I hope it presents some ideas and images that are simply cool and entertain. I think it works perfectly well as-is, without a message. But for those who are looking for a message—it’s there. 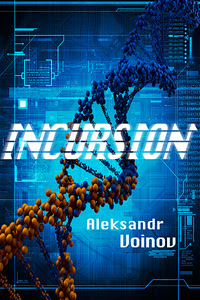 BLURB:
Fighting with your back to the wall is all well and good—as long as you’ve chosen the right wall.
When the local authorities ask Kyle Juenger to hunt a shape-shifting Glyrinny spy, he can’t refuse. After all, he can use the reward to replace his paralyzed legs with cyberware, and maybe even to return to his home planet. Besides, he hates the morphs—those invasive, brain-eating monstrosities whose weapons cost him his legs.
Kyle’s best lead is the Scorpion, a mercenary ship armed to the teeth. Grimm, the Scorpion’s pilot and captain, fascinates Kyle. He’s everything Kyle lost with his legs, and he’s from the same home world. He’s also of the warrior caste—half priest, half savior. But Grimm’s been twisted by life as a merc, and Kyle’s stuck undercover as a criminal on the run.

That doesn’t stop Grimm from coming on to Kyle, or from insisting he’s more than the sum of his past and his useless legs. But Kyle has other concerns—like tracking a dangerous morph who could be wearing anyone’s face. And as if things weren’t complicated enough, Kyle can’t tell if Grimm is part of the solution . . . or part of the problem.

In his spare time, he goes weightlifting, explores historical sites, and meets other writers. He singlehandedly sustains three London bookstores with his ever-changing research projects and interests. His current interests include World War II, espionage, medieval tournaments, and prisoners of war. He loves traveling, action movies, and spy novels.

After all this time since I read Incursion, I remember the best the message of hope. And I do believe that if the reader comes with an open heart and is attentive, this story has the great potential of making the reader a better person afterwards. I know it did that for me. For that I thank you. :)

Thank you. Yep, hope is a big one. Healing and hope and reconciliation, external and internal. I think it's a really positive story in its dark little ways.

I really enjoyed the details hidden inside this story. For instance, the seasonal shifting of Winter. That was something that stuck with me as a reader. Just in that small detail we see the acceptance of change in the Glyrinny. And their word for a shift: become . As Grimm points out to Kyle at the end......All that potential!!

I like that question "what makes a man a man." It's definitely not as simple as biology! I'm looking forward to reading this.

Okay, now I'm curious to read both this and Scorpion. I can see how certain elements would keep weaving through different stand-alone books as you examine certain themes from different angles.

Jadette, this is a great looking blog. I don't think I've ever been here before, but I'll be back. It's very eye catching.

(No swag for me, thanks. I'm just commenting to comment. :D )

Kassandra - Yes, the algae stuff was one of those totally random ideas that made so much sense in hindsight. I love Winter. Thanks, I'm really glad you enjoyed it.

Anon - I think we're quite literally evolving from the idea that it's our physical body that matters (maybe cyberspace has something to do with it, too?). I'm hoping we'll get rid o the last holdovers of that - as people and as a species. Thanks for stopping by!

Val - I can see the "connective" tissue in some of my works - between themes and conflicts and characters. Or how an un-used idea (or an un-used image) can morph into something worthwhil eon its own. I'm quite fascinated by how the Muse works, to be honest, I sometimes whish I had more control over the process. :)

Thanks Alek for guesting today! Incursion is definitely a must read book.

Kyle caught my attention and interest with his legs being paralyzed. His condition adds more dimension to the story with how it's affected him emotionally and mentally. Also, there is always that added potential aspect of his physical condition hindering him in a dire situation.

What kind of apparatus does he use to get around?
Jess1
strive4bst at yahoo dot com

The Glyrinny were really fascinating to me, and it's hard for me to get my head around the idea that what you look like is not really part of who you are. Definitely thought-provoking, and it kept me pondering long after I'd finished reading.

I just finished Incursion tonight. This was a fun story as a sci-fi/space opera story, if that's what you're looking for but, to me, it was also a beautiful and moving 'human potential' story. Beyond that, it was a tightly written story with awesome characters and world building. Loved it.

And just as an aside Aleks, speaking as a chemist, free radicals shouldn't only be seen as something bad for you, they are also the lovely instigators and perpetrators of chemical reactions! All your free radical ideas pinging around in your brain managed to instigate some grand fun IMO.

The more I follow this blog tour, the more I want to read this book. I love posts that get into the "behind the scenes" of the book's creation. It's so fascinating to see how this things brew!

Jadette – Thank you, and thank you for having me. (And sorry about the delay in responses, my company today demanded I work for that salary, so I only really got to it after work).

Jess1 – In the story, he has a “bridge module” implanted in his spine, which is then connected to external metal cages enclosing his legs. So he moves and walks, but it’s not exactly graceful (I think I’ve seen something similar somewhere, probably while researching prosthetics/rehabilitation). In terms of technology, we’re not far away from that stage – I know there’s a lot of work being done to bridge the gap between the meat and the machine. It’s rudimentary, but the cheaper alternative to more advanced cybernetics (like getting both legs fully replaced).

Alyssa – In some way, I see that disconnect on the internet. We’re interacting with our virtual selves, which is definitely removed from how we’d interact if we’d met in “meat space”. I can’t say how often I was confused to learn how people actually look like in “meat space”, because on the internet, you take anybody without their bodies. I expect that’s similar to Glyrinny perception.

Kyahgirl – Thanks, that’s high praise! I’m trying to make a story work on several levels – just make it rich and deep so it can be re-read and people can keep finding stuff if they want to (that’s the type of reader I am, so I’m writing to my taste). It’s fine if they don’t – then I’m just really hoping they have a good time and I manage to entertain them. The one thing I keep writing is “triumph of the human spirit/love over adversity” – which I find very uplifting. It’s pretty much everywhere, but strongest in Counterpunch, Scorpion and Incursion.

And thanks about the free radicals. I kept reading how evil they are (cancer and angeing and all that), so it’s good to know they are actually useful, and I welcome them in my brain if they spark these off. :)

~Ley – Thank you! I need to remember that tall that stuff is actually interesting. As an author, I’m so focused on the end result that I sometimes forget all the quirky and weird things that go into making a story. Some of those I only remember when answering these questions. :) Thanks for commenting!

Thanks for sharing how Incursion came about. I was curious since it seems different from your other novels (or maybe that's just me and cause it's in space), so it's nice to know. When does it come out or is it out already? (I'm not very clear as to which it is)

Emily - I think the voice is the same, but yeah, it's my second foray into sci-fi (after Dark Edge of Honor), and my first solo sci-fi. It's already out, and you can get it at the Riptide site here:

(There's also a long excerpt on there)

Let me know what you think. :)