Thanks so much for having me on your blog today, Jadette! Blue-Eyed Soul is actually a collaboration between myself and my life partner.  Chelsea and I have written together for our own fun for years, and dabbled once with collaborating on a book.  Since that one book (His Every Breath, 2010 Ellora’s Cave), though, we hadn’t really considered collaborating professionally again, as life got in the way as it tends to do.

Then she and I started talking about how we wanted to move back to Massachusetts eventually, where she’s from and where I lived as a child in the Berkshires. And as we sat around one night waxing poetic to each other about the awesome idea of moving to a small New England town where we would no doubt cuddle in front of the crackling fire (despite neither of us knowing how to work a fireplace) and take sleigh-rides in the snow (even though she hates the cold like poison), an idea began to bounce around my head. About a small Berkshires town and two apparent opposites who had a lot more in common than they thought. A musician and a high school music teacher.  A single father and an international pop star.  Oil and water – my favorite types of couples.  But Nano was coming up in a couple months, I was knee deep in self-editing my next solo book - so I didn’t say anything and figured maybe I could use the idea myself down the road when I had time.

Then Chelsea, who I am pretty sure has been reading my mind when I’m not paying attention, brought up the subject of maybe collaborating again. Well, why the hell not? Who cares about schedules already crammed to the gills? Not us! So I eagerly spilled about the idea I’d been toying with.  I’ve always loved the idea of small town romances, as well as fish out of water stories, and Blue-Eyed Soul combines everything I love into one wonderful package.

There’s the reticent hero who’s protective of not just his family and his heart, but also of his entire hometown. There’s the world-weary pop star who isn’t at all what anyone expects him to be and who just wants a little peace.  And there’s the town of Haven itself, with its myriad characters and odd ducks and just plain awesomeness.  It’s a little bit Gilmore Girls, a little bit It’s A Wonderful Life and a lot of just really great romance. Plus it gave me the chance to write about a gay couple with a child in the mix – because kids are left out of gay romances so often, but they’re very much a part of everyday life, for the GLBT as well as straights.

It was mad, insanely fun, pure giddy joy writing this book.  It was our own private Disneyworld, it was so much fun, and the result is something I’m so confident readers will love as much as we do. 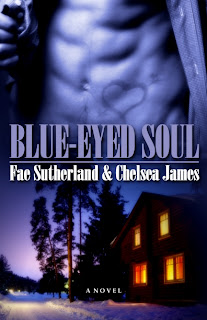 To finish this tale off, I’m including the blurb as well as a brief scene from Blue-Eyed Soul.  It goes on sale January 8th at Amber Quill Press and Chelsea and I hope you give it a shot.  We think you won’t regret taking a trip to Haven with our heroes. :)

International pop star Remey Dufresne just wants a break from it all. And the idyllic town of Haven, Massachusetts seems to be the perfect spot to reconnect with his small-town roots and recharge. He doesn’t expect special treatment from the people who live there, he just wants a haven of his own…what he doesn’t expect is to fall in love – with the town, with its people, and with the local high school music teacher and his precocious little girl.

Single father Aleksander Kelly is by no means impressed by Remey’s presence. In fact, he’s downright irritated. With the media frenzy invading his hometown and inconveniencing everyone, Aleks would rather Remey just go back to La-La land and leave them all alone. It’s a shame the guy’s so good-looking. And kind. And not at all the celebrity diva Aleks expected.

But the Hollywood machine never stops and fame isn’t something you can just hide from. There’s more than just their hearts on the line when Remey’s obligations and Aleks’s reservations collide.

Aleks glanced down at his pie, then up to meet Remey’s gaze again. “So the spotlight might be dimming in a week or so. Think you can behave long enough to get rid of them?” Maybe his voice was a little suggestive.

He had to admit there was a hell of a lot of appeal in the idea of the main protest he had against Remey being gone. If the media feeding frenzy was only temporary, maybe he wouldn’t mind getting to know the resident hot celebrity a little better. Maybe a lot better.

“Why, Aleksander? Are you suggesting there might be something in store for me if I do?” Remey bit his lip, blue eyes warming.

Remey’s brows shot up. “If I’m interested? You have no idea.” He glanced around, then leaned in, lowering his voice. “I’m definitely interested. If you hadn’t been sending ‘back off’ signals since the first time I laid eyes on you… Well, we could’ve broken in the brand-new couch in my living room. We still could.”

Aleks laughed. That was another thing he found surprising about Remey. How awkward he could be. It was adorable and, damn it, Aleks had always had a weakness for adorable boys. “Well, there goes all your mystique, Remey. Do you want to take a second to wrap a bow around yourself, too?” he teased.

Remey blushed and wrinkled his nose at Aleks. “Shut up. And maybe. If you’re lucky.”

Aleks snorted. “I think you pretty much just promised me I would be.”

The blush got brighter as Remey seemed to realize what he’d said and how he’d sounded. Remey covered his eyes with one hand. “Jesus. Allison is always telling me I need to develop a filter.” He peeked out between his fingers. “Sorry. Um…shit. Did I really offer to sex you on my couch, like, anytime?”

Aleks laughed, nodding. “You did, indeed. Don’t even think about changing your mind now. No take-backsies.”

They were both laughing pretty hard by then and drawing more than a few stares and finally Aleks reached over and squeezed Remey’s arm. “Shhh. Or we’ll start a scandal and the paparazzi will never leave.”

Fae Sutherland has always dreamed of being a published author, starting her writing career off at age 11 with a series of stories so bad only a 6th grader could have written them. She has since progressed to more serious writing, though always keeping that dash of irreverence and fun (and a hell of a lot more heat!).

Fae is perhaps best known for her many books co-written with Marguerite Labbe. Between them they are the award-winning, bestselling authors of over a dozen published novels, novellas and short stories. Fae also writes with Chelsea James. Currently, Fae is focusing her writing on solo work.

When Fae's not working on new stories to make her readers sweat, she spends her time on website design, spending too much time on Twitter, and watching oodles of Food Network with her beloved life partner. If there's any time left over, it's spent snuggling the cat.

Posted by Jadette Paige at 3:00 AM

Ohhhh shoot, I'm sorry Fae. I've been running around with my head up my butt all week. Yes, be sure and check out here new links!