Ava March– My True Love Gave to Me

A while back, in the back of my mind, where the muse runs amuck, I toyed with the idea of writing a book with young lovers. I wanted to explore the purity and intensity of emotion that comes with first love and that accompanying complete devastation when everything goes to hell. Sasha and Thomas popped into my head. Sasha, confident in his desires and head-over-heels in love with Thomas. And Thomas, unable to resist Sasha, yet very conflicted about his desires for him. A situation poised to blow up in Sasha’s face. I also knew the guys would reconnect years later once Thomas had come to terms with his desires and realized he loves Sasha. I was so enamored with the characters I did something I don’t do often – I immediately started their book. And shortly into it, hit a wall.

You see, I’m a muller. Oh, and a plotter. It takes many, many months (usually over a year) to go from idea to starting a book. During that time in between, the details work themselves out, chapters plot themselves, the characters become fully formed, etc. I know exactly how a book will go, how each scene will play out, when I start chapter 1. But as I soon found out with My True Love Gave to Me, I started it too early. I hadn’t figured out enough to fill a book. So it got shelved and I moved onto writing other stories. Likely Thomas and Sasha would have stayed shelved indefinitely, stuck in stuck, if not for a call from my agent with an opportunity to be part of Carina’s holiday anthology.

I swear, a light bulb went off above my head. Everything clicked, all the missing details, the missing scenes, filled themselves in. The holidays – when people celebrate the season with those they love. The significance of the timing when everything hits the fan and then later, when Thomas returns to England for Sasha, and how that timing affects Sasha’s feelings about the holidays. The theme of family, love, home, and forgiveness of the season. I was also in the process of pulling together the proposal for the Brook Street trilogy, and right there, I had the secondary characters that had been lacking in the idea for My True Love Gave to Me.

I love those moments when everything clicks. Where the picture comes into full, perfect focus. It’s frustrating as all get out when something gets stuck, but I’ve found that trying to use a big old pry bar doesn’t work. Patience is what works. Thomas and Sasha were meant to be a holiday story. Trying to rush them got me nowhere. I needed to hold onto my patience and wait for that perfect moment when everything would click into place. Just as Thomas needed to hold onto his patience in My True Love Gave to Me. The reward, earning Sasha’s forgiveness and love, was definitely well worth it for Thomas. 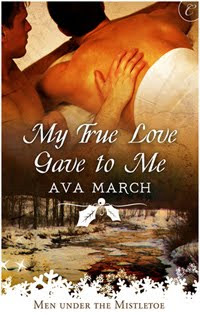 Alexander Norton loathes the festive season. The revelry of the ton is a reminder of Christmas four years ago, when his first love, Thomas Bennett, broke his heart and fled to New York without a word. So when he encounters Thomas at a holiday ball, Alexander is determined not to let on how much he still hurts.

Thomas has returned for one reason only: Alexander. Having finally come to terms with his forbidden desires, he will do whatever he must to convince Alexander to give their love another chance. But instead of the happy, carefree man Thomas once knew, Alexander is now hard and cynical. Saddened to know he's to blame for the man's bitterness, Thomas resolves to reignite the passion he knows lies hidden behind the wall of disdain...


Excerpt – a glimpse of young love…before it all hits the fan:

Thomas gave his greatcoat a tug to straighten it. “How did the cards treat you?” he asked, every trace of hesitation gone and as casual as could be, as if Alexander wasn’t on the verge of tackling him right there, the butler standing guard at the front door be damned.

“Didn’t leave behind any vowels.”

A frown threatened to pull his lips. “No need to sound surprised. Or relieved. I can hold my own in a game of cards.”

“I know. You don’t much care for cards. But as far as vices go, it’s not that bad of one.” Most every man in London gambled, to the point where it was an expected way to pass the hours. Given that Thomas always did what was expected of him, one would think he would have no qualms at all joining him at the card tables. But rather than allow Thomas’s disapproval to dampen his spirits, he threw the man a smile. “You could do with a bit of vice yourself, Bennett.”

He received an arch of a dark brow. “I have plenty of that—” Thomas lowered his voice, “—thanks to you, Sasha.”
Alexander’s breath caught. He briefly closed his eyes in an effort to rein in the sudden surge of lust, to keep it hidden from view.

And damnation, Thomas had deliberately added the Sasha to torment him. Thomas well knew what effect it would have on him. After Alexander mentioned his grandmother was from Russia, Thomas had started calling him Sasha…when they were alone, of course. Thomas was the only person who referred to him that way. He was Alexander to his family, Norton to his acquaintances, and Sasha to Thomas. A name owned solely by the man he loved. A name that seemed designed to be whispered in a heated rush against his lips.

A cool draft of air swept into the entrance hall as the butler opened the front door. “Mr. Norton, your carriage.”
It was all he could do not to dart out the door. His father’s black town carriage stood at the ready at the foot of the stone steps. Another one of their hostess’s footmen had the door already open. Rather than immediately enter, he paused to give the direction to the driver then followed Thomas inside, settling on the black leather bench opposite him.

“Why are we going to Drury Lane Theatre?” Thomas asked.

“We aren’t.” He closed the shade on the window in the narrow door, cloaking the interior in almost full darkness. “I needed to give the driver a direction and it will do as good as any.”
The carriage lurched forward.

Alexander pounced on Thomas, cutting off his words.

Knees straddling muscular thighs and with his hands cupping that strong jaw, he pressed his lips to Thomas’s. Greedy and impatient, he flicked his tongue against the seam of Thomas’s lips.

With a groan, Thomas opened his mouth. A silken tongue brushed his own.

Hot and intense, sensation washed over him, filling his chest, his heart, his soul. A moan shook his throat.

By God, it was only like this with Thomas. No other had ever come close to rousing these feelings within him. Making his pulse pound through his veins and need claw desperately at his throat. This was where he belonged. With Thomas. In the man’s arms.

My True Love Gave to Me: Amazon Kindle http://www.amazon.com/My-True-Love-Gave-ebook/dp/B005Z1C2X2/ref=ntt_at_ep_dpt_10

Posted by Jadette Paige at 3:00 AM