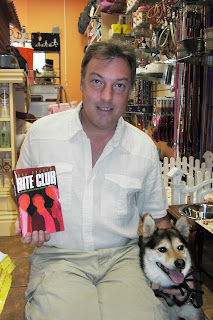 The genesis of each of my three currently available novels is quite different. Though it may not seem to be, BITE CLUB is very much a response to the AIDS epidemic. To understand how that is, you must remember that it was originally written in the mid-nineties and published in the early 2000s. At the time, I felt that AIDS was costing the Gay community more than just lost lives and vanished talents; we had also begun to lose our collective sense of humor. BITE CLUB was deliberately written as ‘high camp’ during a time when no one in the Gay community felt much like laughing. I felt it was important to preserve the unique ‘gay sensibility’ to certain types of humor and, I believe, BITE CLUB does that exceedingly well.

IN FLESH AND STONE, on the other hand, ended up being a cathartic experience. My sometimes agent had asked me to take a whack at paranormal romance for a company she was working with. I made several false starts and, in truth, those early attempts were just terrible!


My husband had passed away suddenly and, I think I was taking the process of writing far too seriously not having any fun with it because a lot of the fun had escaped from my life when Jimmy died. At the same time, I’d wanted to do something with gargoyles for awhile but nothing was gelling. One day, I was sitting at the computer and a mental image of the Zodiac Men in the novel came to me: twelve naked statues with, of course, twelve sets of genitalia. Almost simultaneously with that mental flash, I wrote the opening line of the novel which was, to my surprise, funny!

From that point, IN FLESH AND STONE simply poured out of me.  I finished the entire book in, I think, four or five days.  I had no idea what was compelling me to write in such a frenzy until after it  was finished and I realized what the book was really about was Jimmy’s  death.

I admit to being a little embarrassed at how I got myself into FOR LOVE OF THE DEAD.   It was partly written on a semi-bet.  Some of the major names in zombie fiction were adamant that it was impossible to write a paranormal zombie romance.  Zombies, they said, were too inherently gross to provide much fodder for romance.  On the other hand, I wrote it because my then-publisher had strict proscriptions against publishing anything that had necrophilia in it.  So, of course, I was irresistibly tempted to push the envelope and try to get away with a necrophilia scene.

Frankly, I’m always surprised at how well it sells because, personally, I’m not fond of the book and some of the reviews were just scathing.  I often toy with re-writing it but, there’s far too much on my plate right now so, we’ll have to wait and see.
Blurb: 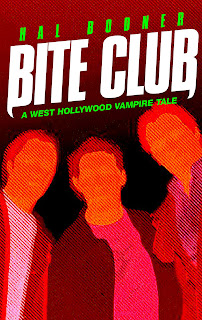 Welcome to the Bite Club -- where the only requirement for membership
is death.

West Hollywood, California. The Creative City. Liberal and welcoming.
Free from discrimination and hatred. A safe place to live if you're
gay. But West Hollywood isn't safe anymore...

Someone in town has a macabre passion for beautiful young men.
Healthy, gym-toned male bodies keep turning up -- tortured, drained of
blood, missing parts and quite, quite dead.

Weho City Coroner Becky O'Brien is helpless to stop the accumulation
of corpses. At the end of her investigative rope, she calls upon an
old college friend, Christopher Driscoll, who is something of an
expert on serial killers. Rushing to her aid, Chris arrives in town
with his quirky boyfriend Troy in tow. Prowling the dark alleys and
cruisy bars of WeHo in search of the psychotic fiend, the trio soon
realizes that something possibly not human has taken up residence in
Boys' Town -- something with an insatiable hunger for the flesh and
blood of hot young men.


Bio:
Hal Bodner is the author of the best selling gay vampire novel, Bite Club. He tells people he was born in East Philadelphia because so few people know where Cherry Hill, New Jersey is located. The first person he saw in his life was C. Everet Coop, future US Surgeon General, who delivered him. Thus, Hal was ironically destined to become a heavy smoker.
He moved to West Hollywood in the 1980s and has rarely left the city limits during the past twenty years. Hal is so WeHo-centric that he cannot find his way around Beverly Hills, the next town over.
Hal has been an entertainment lawyer, a scheduler for a 976 sex telephone line, a theater reviewer and the personal assistant to a television star. For awhile, he owned Heavy Petting, a pet boutique where all the movie stars shopped for their Pomeranians. Currently, he owns an exotic bird shop.
He has never been a waiter.
He lives with assorted dogs, and birds, the most notable of which is an eighty year old irritable, flesh-eating military macaw named after his icon – Tallulah. He often quips he is a slave to fur and feathers and regrets only that he isn’t referring to mink and marabou. He does not have cats because he tends to sneeze on them.
Rapidly approaching middle-age, he remembers Nixon.
He got “married” very late in life to an incredible man. Sadly, after five amazing, if turbulent, years he was widowed and can sometimes be found sunbathing at his husband’s grave while trying to avoid cemetery caretakers screaming at him to put his shirt back on.
Hal recently took a crack at writing erotic paranormal romance -- which he refers to as “supernatural smut” -- with “In Flesh and Stone” and “For Love of the Dead”. While he enjoyed writing them immensely, he has resolved to return to his comedic roots with additional “Chris and Troy” novels.
He blushes to admit he is currently romantically involved with a man roughly half his age. As a result, he has recently discovered that the use of hair dye is evidently not an adequate replacement for Viagra.
Posted by Jadette Paige at 3:00 AM