The cliché concept of an undead, immortal creature feeding on the blood of the living has been around for hundreds of years. It’s been done to death (pun intended) since the rampant legend of Vlad the Impaler birthed Bram Stoker’s Dracula. 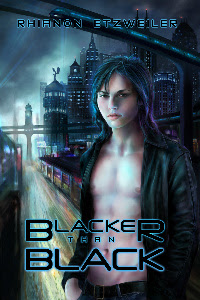 The idea that humans are no longer being the top of the food chain (or no longer alone in that position) is an underlying theme of a healthy number of dark fantasy and urban fantasy books. Whether it’s fae, werewolves, vampires, shifters, or some other equally extraordinary race of creatures that usurps Homo sapiens, most of the tropes have been explored to exhaustion.

With “Blacker Than Black,” I wanted to go a different direction—a little further off the beaten path than humans being reduced to whoring blood to the ruling vampires. And selling their soul to a demon was off the table; it leads down an inevitable road of religious connotations. That wasn’t the type of story I wanted to write.

What else does a person have to sell? When you strip away the trappings of beliefs, possessions and social status, where’s the common denominator? The answer is emotions. Personal energy, aura. No matter what you take from people, the chi is autonomous. It remains firmly theirs. They can feel whatever they wish, and it can’t be controlled or taken away.

I wanted to change that. And that’s when I hit on using energy vampires. We’ve all known them. Those people that seem to suck the positive, happy, upbeat energy out of you, just by being in close vicinity. When you get away from them, you feel exhausted and relieved. Sometimes it takes a while to recover, to pull your mood up out of the dark hole they sink you into.

These are the vampires. Within the laws of this reality, taking chi from another living being extends the lifespan of the recipient, while shortening the donor’s. Thus vampires become immortal beings, though not without cost. They’re still human, the result of genetic permutations over time that give rise to a new subspecies of humanity. Homo sapiens bows to Homo hirudo. The leech.

In Black’s world, the mundane are reduced to second-class citizens, permitted to exist and live their lives for the sole purpose of enriching the quality of the emotional base the vampires have available.
Much the same way a farmer who wants quality meat will feed a healthy, balanced diet to an animal intended for slaughter.

Some vampires love the taste of hope. Some prefer the tang of fear. Some find the bitter twist of hatred more palatable. Others abhor the forceful acquisition of emotional energy and insist their sources offer it freely. Don’t rape the cattle. They must walk willingly to the slaughterhouse.

And then there are the ones that practice abstinence. There’s always some, in every society…

Blurb from Blacker than Black:

Apparently, my twin and I are two of York's most notorious criminals.  We've been Nightwalkers in the blue-light district since the vamps took over the world.  Don't know how many years it's been.  Long enough that a stream of fellow 'walkers have come and gone.  Most don't last long selling their chi.  End up face0down in the futter, or worse.

For us, one night and one sale change everything.
Monsieur Garthelle is the first john to hunt me down. He calls me a chi thief in one breath and offers absolution—servitude—in the next. Maybe I’m a sucker, but I like living and breathing. Strange that such a powerful vamp would show leniency to a mere human. And something’s not right with the chi I took from him. It won’t go away.
Neither will he, and he’s forcing us to spy on his peers. Then a vamp turns up dead, and we go from playing eyes and ears to investigating a murder. This isn’t what I signed up for. All I ever wanted was to sell a little chi, maybe steal some in return. I should’ve kept my damn hands to myself.
This is my story. Look through my eyes.
To read an excerpt and purchase Blacker than Black, click here.
First Wave Winner's Choice:  Pick any one backlist book from Rachel Haimowitz, Aleksandr Voinov, L.A. Witt, Brita Addams, or Cat Grant ("Frontlist" books, i.e. Riptide releases and newest non-riptide release, are excluded, as are the Courtland Chronicles.)

Sounds like a unique and fascinating story :-) Can't wait to read it in January!

nice blurb and definitely interesting how Rhi got her inspiration to write this book!

Can't wait to read this.

Thanks everyone for stopping by!

I like the twist on a theme. It sounds good!

I LOVE learning how this story came about and I applaud the fresh spin you put on the vampire mythos. I adore the cover of this book and the atmospheric feel of the setting. Hoping Santa brings me this for Christmas.

Thanks to everyone who stopped by! I'm very happy that you've all enjoyed getting glimpses of the backstory and inspiration behind this book.

It's a tome, and definitely worth the wait until January! A long read to get you through 'til spring...
Or the first of February, anyways. =D

Wow... the concept behind the story is truly amazing.
Definitely unlike anything I have ever read.
I can hardly wait to read it. I know I'm going to love it!