Thanks so much for the invitation to post, Jadette. I’ve enjoyed reading the stories behind the stories here on your blog for quite some time, so it’s great to be here.

I’d like to talk a little bit about my new novella, The Professor’s Assistant, a male/male sci-fi / fantasy romance just released from Liquid Silver Books.

I had just submitted my first book and I was waiting to hear whether it was accepted. But I knew that I couldn’t just sit around biting my nails. I had to get started on the next piece, especially since I’d discovered how much I enjoy writing. It can be a bit addictive once you get started. 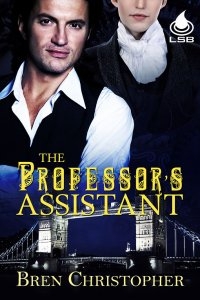 Although I had a lot of ideas of my own, I wondered if I would have more luck getting a manuscript accepted if I wrote in answer to a call for submissions. Not just any call, though. It had to be something fun to write, or what would be the point? I’m a reader and a fan first, and I have to write the kind of story I would like to read.

So I read a lot of these calls for submissions on various publishers’ websites, but not many of them appealed to me until I saw a call for steampunk novellas. Now that hit home. I’ve been a big science fiction fan since I was a kid and read my first Andre Norton and Robert Heinlein juveniles, but I didn’t discover the male/male romance genre until I got my iPhone in 2009.

I got the Kindle app for my iPhone, and that was the first time I’d ever read more than a chapter or two of an eBook. I had read some slash fiction on the internet (Jack/Daniel from Stargate *sigh* - anyone else? Just me?), but I had no idea there were so many actual m/m romance novels out there. I got completely addicted and ended up going to the doctor for eye strain. I wanted to blame it on the iPhone screen but he said no, I needed reading glasses anyway because of my…ahem…age. Can you believe that?

There were also a lot of steampunk romances available in eBook format, and I had just finished reading several of those, so I had a pretty good idea of the type of story I wanted to write: something with a lot of science fiction elements, but in a setting of Victorian London.

Even though I had read many books set in that age, I still did some research into 1885 London and Paris, and into how steam-powered vehicles work. Researching and reading the detailed descriptions of that era was a lot of fun for me. Of course, The Professor’s Assistant is set in an alternate universe, so not everything is supposed to match exactly with our timeline. But I realized I would have to know the history in order to be able to depart from it as the story required.

So now you have the recipe: one call for steampunk submissions as inspiration, plus one lifetime of science fiction fandom. Combine it with a newly discovered love of m/m romance, and add a dash of steampunk fun. Throw it all in a pot and you have The Professor’s Assistant.

Just don’t forget that, at its core, it is a romance. Two people meet, fall in love, and overcome many obstacles to finally reach their Happily Ever After. Oh, and have lots of really hot man sex along the way. I did say I write what I like to read…

And that’s probably a good place to stop. Below is the blurb for the story, along with a link that will take you right to the full excerpt of Chapter One. If anyone has any comments or questions, I’ll be around the rest of the day. I look forward to chatting with you here, or come visit me at brenchristopher.com.

The Professor’s Assistant by Bren Christopher

Lured by rumors of a momentous invention, Agent Julian Blake steps into the New York Gate and emerges outside London.

It is the same year, 1885, but an earth parallel to his own. The two timelines are almost identical, but the slight variation is enough to threaten his mission as it includes an attitude toward same-sex attraction that is less than accepting.

He never expected that difference to pose a problem. Julian has an important mission to complete; a mission with far-reaching consequences not only across the alternate earths, but into their pasts. For the momentous invention is a working time machine.

And the inventor’s assistant is a beautiful, auburn-haired young man named Daniel who causes Julian to disregard the Department rules he has lived by for so long.

But there are others interested in the professor’s new invention, and when tragedy strikes, the professor’s lovely assistant might just be the only person left with the knowledge to recreate the device.

Now Daniel is a target, and Julian is in a race to protect him and retrieve the knowledge of the time machine from those who would misuse it. Read Chapter One

Buy Link
Posted by Jadette Paige at 5:00 AM