A Tryst with Fate by H.C. Brown

The first time I read the blurb to this novel, I wanted to read the book.  It so sounded like something I would love.  I happen to adore time travel romances. What better than a time travel male/male romance.  Be still my beating heart!

From the first page, I was completely immersed in Alex's and Colt’s story.  The novel begins in the present with Colt buying the portrait of Lord Alexander Swift.  He has inherited Alex’s home and has restored it with the painting being the final touch.  Colt runs into a stranger after the auction who has written a book concerning Alex and his lover.  The lover turns out to be a man who also happens to be spitting image of Colt. During the time Alex lived, any kind of man love was strictly forbidden with a sentence of death to anyone caught in the act.

Through information given to Colt by the author, he decides to inspect the cellar. Seems one day Alex went into the cellar and disappeared with his cousin.  Colt believes he might discover Alex's remains there.  So begins the incredible journey of two men meant to be together.  Their love spans hundreds of years.

I loved the reactions of both men at this time.  The excitement and uninhibited love Colt had for Alex. At first, Alex is amazed at the things Colt tells him but within no time he comes to believe in him.  Their love grows even more.  If you want a story to become immerse in, then A Tryst with Fate is the book. The details, emotions, even the dialog are realistic and believable.  I highly recommend this book to anyone 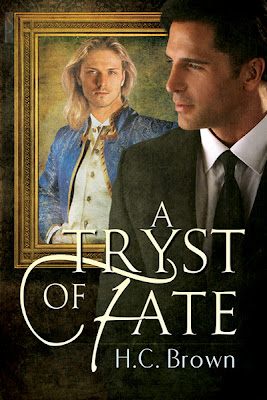 During a conversation with author, Jake Williams, Colt discovers Lord Swift and his cousin had mysteriously disappeared from the cellar one evening, shortly after Alexander's illicit affair with the rogue, David Fitzhugh. Jake reveals Colt bears a remarkable resemblance to Fitzhugh.

Colt decides to investigate Alexander's strange disappearance and ventures into his cellar late one night to look for a secret passageway. When his flashlight fails, Colt finds himself transported back in time to 1775 and there he comes face to face with the man of his dreams— Lord Alexander Swift.

Posted by Jadette Paige at 4:18 PM

Thank you so much for this wonderful review.